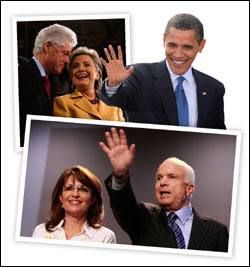 HBO Films has optioned "Game Change: Obama and the Clintons, McCain and Palin, and the Race of a Lifetime," an in-the-works Harper Collins book by political writers Mark Halperin and John Heilemann.
The pay network has hired "Blood Diamond" scribe Charles Leavitt to adapt the behind-the-scenes look at the 2008 presidential election from the perspective of the candidates and their respective camps.
Halperin is editor-at-large at Time magazine, and Heilemann is national political correspondent for New York magazine. They will be consultants for the film. The book will be published early next year.
Heilemann and Halperin have covered other presidential campaigns, but while returning from a John McCain event, they began musing that the larger-than-life characters in the 2008 election would lend themselves to a movie more than past candidates such as John Kerry, Al Gore or Bob Dole.
They decided to do a book that focused more on the characters than the pollsters and campaign teams. Heilemann knew Barack Obama from their Harvard days, Halperin had become acquainted with Sarah Palin, and they both knew Joe Biden, McCain and the Clintons.
"Focusing on those characters went to the essence of why this was the campaign of a lifetime, not just for the candidates, but for the country," Halperin said.
"It's funny to call Obama and Hillary characters, but that's how I have to look at them," Leavitt said. "To me, the primary was one of the greatest title fights of the century, and John and Mark have a treasure chest of anecdotes and inside stories. I think it will present itself almost like a stage play, like 'Frost/Nixon' or 'The Queen.' "
Read the full article at:http://www.variety.com/article/VR1118002387.html

Posted by Dankwa Brooks at 4:31 PM