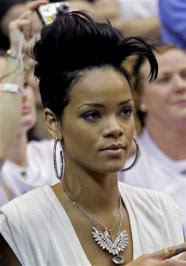 LOS ANGELES — The first interview with Rihanna (Pictured left) about Chris Brown's assault on her is airing this week on ABC.

The network says the pop star's one-on-one with Diane Sawyer will air Thursday and Friday on "Good Morning America" and Friday evening on the news magazine "20/20."

Brown's attack on then-girlfriend Rihanna occurred in February. He was sentenced in August to five years' probation, six months of community labor and a year of domestic violence counseling after he pleaded guilty to felony assault.

Rihanna's ABC interview coincides with the debut of her new single, "Russian Roulette," (of course-Cool Black) from her upcoming album, "Rated R." It's her first CD since 2007's multiplatinum "Good Girl Gone Bad."
Copyright © 2009 The Associated Press. All rights reserved.
Posted by Dankwa Brooks at 5:09 PM