Jay-Z: Beyonce Wanted To Beat Tabloids To The Punch On Pregnancy Story


Jay-Z said Beyonce decided to announce that she was pregnant on the MTV Video Music Awards to pre-empt a tabloid news show that wanted to break the news.

The rap superstar mused about the decision in an interview in GQ's Man Of The Year issue. (linked below) "It was actually Bey who wanted to [announce] it," Jay-Z said in the interview. "You want to be in control of your life."

Jay-Z, who is usually coy about his personal life, said that he wanted to be an active parent — he plans to change diapers — in part because his own father left the family when Jay-Z, born Shawn Carter, was 11 years old. Kelly Rowland, Beyonce's Destinys Child bandmate, accidentally confirmed two weeks ago that the duo is having a daughter.

"Providing—that's not love," he told GQ. "Being there—that's more important. I mean, we see that. We see that with all these rich socialites. They're crying out for attention; they're hurting for love. I'm not being judgmental—I'm just making an observation. They're crying out for the love that maybe they didn't get at home, and they got everything. All the material things that they need and want. So we know that's not the key."

Jay-Z grew up in the Marcy Projects in the Bed-Stuy section of Brooklyn, at a time when the neighborhood was one of New York's most dangerous areas. His father, Adnis Reeves, withdrew from the family after his brother was killed, and began abusing alcohol. The two would not speak again until 2003. Not long after, his father died from what Jay-Z said were alcohol-related causes.

“My dad swore revenge and became obsessed with hunting down Uncle Ray’s killer,” Jay-Z wrote in Decoded, his 2010 memoir. “The tragedy – compounded by the injustice – drove him crazy, sent him to the bottle, and ultimately became a factor in the unraveling of my parents’ marriage." 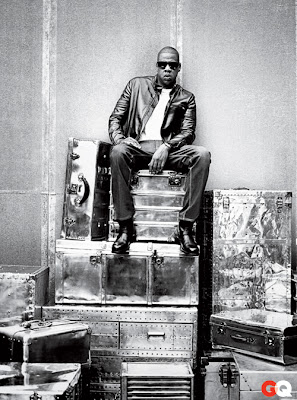