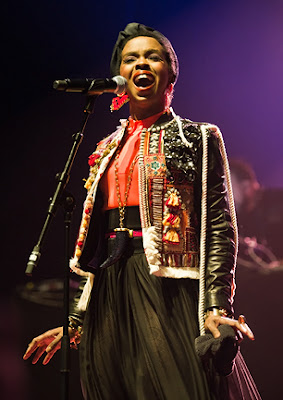 Lauryn Hill (pictured above) pleaded guilty in a New Jersey courtroom on Friday to evading federal taxes on $1.8 million earned between 2005 and 2007, the Associated Press reports. The singer faces a maximum one-year sentence for each of the three counts.

Hill declined to speak after the hearing, but her attorney, Nathan Hochman, indicated that she plans on paying back the taxes owed. U.S. Magistrate Michael Shipp agreed to delay the sentencing from early October to late November in order to give Hill time to make payment.

When Shipp asked Hill if anyone had directly or indirectly influenced her decision to plead guilty, Hill gave an enigmatic response that seemed to promise a future statement: "Indirectly, I've been advised my ability to speak out directly is for another time, at sentencing."

Charges were brought against Hill earlier this month, after which the singer took to Tumblr to address her side of the situation but focused on her time outside of the spotlight: "During this period of crisis, much was said about me both slanted and inaccurate, by those who had become dependent on my creative force, yet unwilling to fully acknowledge the importance of my contribution, nor compensate me equitably for it."

Hill added in the post that she felt her "potential to work" was in danger and thus said, "I did whatever needed to be done in order to insulate my family from the climate of hostility, false entitlement, manipulation, racial prejudice, sexism and ageism that I was surrounded by.

"There were no exotic trips," she continued, "no fleet of cars, just an all out war for safety, integrity, wholeness and health, without mistreatment, denial, and/or exploitation."
Posted by Dankwa Brooks at 12:19 PM