At the outset of BAD 25 – the documentary film celebrating the 25th anniversary of Michael Jackson**'s Bad album – director Spike Lee quickly dispenses with talk of the pop superstar's personal struggles, diving right into the artistic perfectionism that drove him to achieve his career milestones. "Hopefully, that's what this documentary is about – it's gonna have people return to focusing on the music, his art, which I feel is his legacy, in addition to his children," Lee, dressed in a white BAD 25 T-shirt, told reporters at the Toronto International Film Festival, where the movie had its North American premiere over the weekend, after debuting in Venice 25 years to the day since Bad's release.

To piece together the making of Jackson's landmark LP, Lee unearthed archival footage from studio sessions and music video shoots and conducted interviews with Jackson's many collaborators, including Quincy Jones, Martin Scorsese, Stevie Wonder** and Sheryl Crow, and stars who were inspired by his music, from Kanye West and Mariah Carey to Questlove and Justin Bieber.

The film, which will get a television premiere on ABC on November 22nd, [Thanksgiving Night] follows the making of Bad track by track; though it can feel clinical at times, it also revels in cool details, like the origin of Jackson's gravity-defying lean in "Smooth Criminal" and his famous expression, "Shamon!" Then, abruptly, Lee shifts to Jackson's death in the summer of 2009, collecting reactions from his interview subjects, many of whom choke back tears and break down. "Those were all real, raw emotions that were displayed," said Lee.

One of the most impactful statements in the documentary comes from music journalist Danyel Smith. "We should all be ashamed," she says. "The way that I interpret that," said Lee, "is that Michael should be with us. He should be here."

"Listen to the song 'Price of Fame,' which he wrote specifically about the situation," said Lee, holding a copy of the release. "How can you get privacy when you're the most recognizable person on the planet?"

"Did you see the disguises he had?" Lee added with a laugh, referring to a moment in the film that shows photographs of Jackson wearing intricate facial disguises. "He had to do that. He couldn't go anywhere in the world without there being a riot. Man, I wouldn't wish that on anybody. He became a prisoner of his fame. I mean, I'm not rewriting Michael's titles, but [the song] could've been [called] 'Prisoner of Fame,' instead of 'Price of Fame.'" 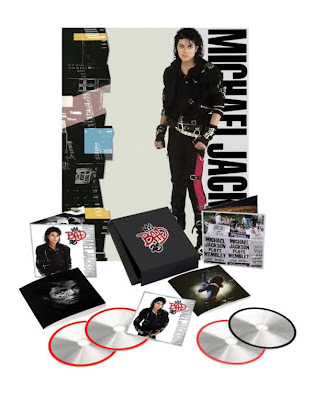 DVD - Michael Jackson's legendary July 16, 1988 concert at Wembley Stadium in London. This DVD is not a compilation of performances, but rather one complete show, exactly as Michael performed it for Prince Charles, Princess Diana and the 72,000 fans who were in the audience for that night's sold out show. The DVD was sourced from Michael Jackson's personal VHS copy of the performance as shown on the JumboTrons during the concert. This footage was only recently unearthed and is the only known copy of the show to exist. The visuals have been restored and the audio quality enhanced so that fans can share in the excitement of that famous night.

CD2 - A CD containing previously unreleased material recorded in Michael's personal studio at Hayvenhurst. This material includes early demo versions of songs from the album as well as demos for songs not included on the final album. All of this material is being released as it was recorded during the BAD sessions. Nothing has been added or changed. In addition, this CD also includes new remixes from internationally renowned DJ/producers.

CD3 - A CD showcasing the audio from the sound truck recordings of the July 16th Wembley performance. The first-ever live Michael Jackson CD to be released, this is the only concert from the BAD Tour known to exist on multitracks.

Posted by Dankwa Brooks at 2:18 PM