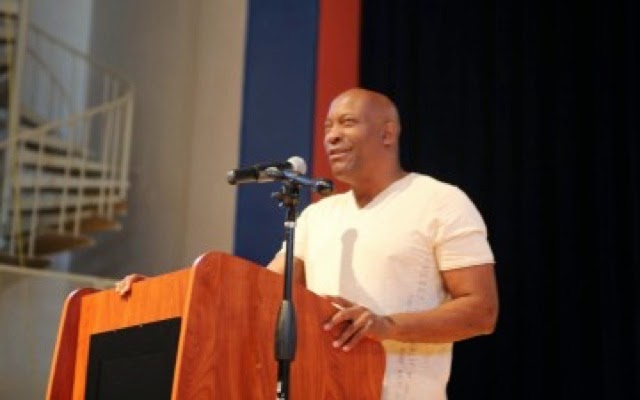 Acclaimed director John Singleton might have spent the Memorial Day holiday anywhere in the world: on set of his upcoming FX television project Snowfall, or perhaps just chilling on a yacht. But the Oscar nominee opted to spend part of his weekend in Baltimore, engaging with young people in the aftermath of Freddie Gray’s death.

Singleton was the special guest at a workshop aimed at giving high school and college students advice on breaking into Hollywood. The event was co-hosted by Q. Jacobs, a Baltimore-born actress, producer and director now based in Los Angeles.

The forum—which drew dozens of youngsters on a Saturday morning—was held in the auditorium of Frederick Douglass High School, a historic, predominately Black school that received national attention after some of its students took part in a youth uprising that occurred just hours after Freddie Gray’s funeral.

The 25-year-old died on April 19 after being arrested a week earlier and sustaining spinal injuries. Six officers have been indicted on various charges in connection with his death, which has been ruled a homicide. Prior to the officers being charged, there were weeks of peaceful protests in the city; however, the situation later exploded when teens and police clashed at a local mall across the street from Douglass High.

John Singleton, whose films such as Boyz n the Hood, Poetic Justice and Baby Boy explore the implications of inner-city violence, said he came to town to help be part of solutions as Baltimore seeks to rebuild. “I’m trying to encourage change, which comes from within,” he remarked.

Students in attendance hailed from Douglass High and several other Baltimore high schools, as well as Morgan State and Howard Universities. They received straight talk and industry tips on everything from creating proper headshots to joining the Screen Actors Guild.

Singleton, the first African-American and youngest person ever to have been nominated for an Academy Award for Best Director, also spoke about the importance of Black filmmakers and creative professionals making art that addresses the community.

“I try to make movies for us,” said Singleton, who’s helped ignite the acting careers of Taraji P. Henson, Tyrese Gibson, Morris Chestnut, Ice Cube and Cuba Gooding Jr. “If other people get it, great. But it’s about what’s special to us.”

Besides movies that range from the drama Rosewood to action flicks like Shaft and 2 Fast 2 Furious, Singleton has been busy with new projects of late. He recently directed episodes of the Fox hit show Empire and is currently directing a new FX drama called Snowfall, that will address the crack cocaine epidemic.

Singleton will also serve as executive producer for Q. Jacobs’s original play, The Come-Up Girl, which focuses on the lives of women who attach themselves to men for financial gain. The play will open in Baltimore and tour various cities before wrapping up in Los Angeles. Jacobs hopes to do casting calls in June, and discover actors and crewmembers in her hometown.

“Baltimore has been associated with negativity,” says Jacobs. “But we have so much talent. We’re hustlers, grinders. We can compete and be the best.”

Baltimore mayor Stephanie Rawlings-Blake, citing their dedication to the empowerment of city youth, gave Singleton and Jacobs certificates of recognition. After their talk, they took numerous questions from the audience and posed for photos with students backstage.

Diondre “Grim” Jackson, a recent graduate of Douglass High, performed a dramatic recitation for Singleton, garnering enthusiastic applause. The young Baltimorean says the workshop was educational and inspired him to reach for his dreams. “I’m hoping that maybe I can go Hollywood and make it big,” he says.

Posted by Dankwa Brooks at 9:54 AM