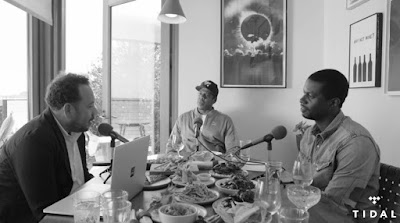 Last month, JAY-Z sat down with Elliot Wilson and Brian 'B.Dot' Miller of Rap Radar to share exclusive details about his newly released 4:44 album. The TIDAL podcast was broken into two parts that aired on August 18 and August 25.

In the interview, he spoke about his relationship with Kanye West, how Blue got behind the mic for that legendary freestyle, and much, much more. JAY-Z recently uploaded the entire interview on YouTube so non-TIDAL subscribers finally have access to the rare, in-depth discussion.-Sydney Gore, Fader

WATCH both parts below.

Posted by Dankwa Brooks at 1:27 PM