From Elvis to Eminem 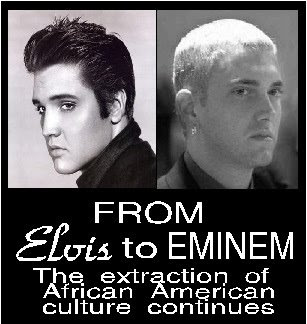 A COOL BLACK ARTICLE OF INTEREST
April 7, 2003
For years it has been contended that African American artist Chuck Berry is the true king of Rock & Roll. He and the likes of Little Richard, who has been recently administered the title of the lesser “Architect of Rock & Roll”, started the genre that made Elvis famous and more popular than either ever was. The same can be said for Eminem. Rap was here long before Eminem, yet he’s seen by many as “the best rapper ever”, “King of Rap” etc. I’m not saying that Em doesn’t have the skills and shouldn't be praised; bottom line is that he is damn good at what he does, but the best ever? Only time can reveal that.
Many of his detractors though, see his success as yet another example of white America's refusal to embrace African-American culture unless it puts on a white face. That would be true if many of the white kids who buy Eminem's CDs have also been strong supporters of Dr. Dre, Snoop Dogg, Jay-Z, DMX, etc. before Em even came on the scene. It has also been long known that 60-70% of record buyers are these same white kids. I also think Eminem is also just plain ole playing the “Madonna card”. By that I mean a strategy superbly deployed by music artist Madonna, be raunchy, be raw, be controversial, sell records. It works!
I have read where people said that they don’t even like rap music or Eminem, but went to see his movie 8 Mile because of all the hype. (To date the movie has made 116 million worldwide. Not to mention it set an all-time one week sales record for an "R" rated DVD, generating consumer spending of $75 million in purchases and rental.)
In a MTV interview Raymond Scott-co-founder of The Source magazine who is also a rapper under the name of Benzino took many verbal assaults against Eminem. Benzino, whose album sales are no way equal to Eminem’s, may seem like he is playing for attention by picking on the biggest name in rap. He explained it however as, "I had a problem with 'the machine,' with the double standard in hip-hop," "Certain media outlets take to him and look at him as the savior in hip-hop and the #1 in hip-hop and [do] not recognize the guys out here that created hip hop. ... Eminem is just the hood ornament for the machine. ... You think I could grab my crotch and put my ass in people's faces the way he does? No way. But as long as the color of his skin and his eyes fits what America wants, ... it's all right."
And to a certain extent I agree. Tupac [Shakur] was just as adversarial and licentious as Eminem, but scared the majority of America. While they were afraid of Tupac and what he represented they would and did embrace Eminem. Eminem talks about "white boy stuff" acts of self contusion like cutting your wrist, getting high on prescription pills-that kind of stuff, the kind of stuff white America can identify with. The stuff that happens in thier culture. They can't identify with the "street reporting" that goes along with gangsta rap. KRS-ONE (the teacher) said that white rap fans like to listen to rap because it lets them live vicariously through what the rapper is saying without EVER having to live that life that rapper has led. This is true because I do it.
I'm not as "gangsta" as say a 50 Cent or DMX, probably oppositely so, I live vicariously through what they are saying. It’s like reading a book or watching a movie and identifying with a character even though you never been in that situation.
In the end, majority rules. If the majority can identify with it, great!, they will recognize you. If not, you will surely be ingnored.
-Written by Cool Black aka Donald Dankwa Brooks
+Orginally published at Cool Black's Media Madness
An interesting aside to this article-Eminem's own song "White America". You can watch the video below (WARNING contains explicit language)

Posted by Dankwa Brooks at 5:30 PM