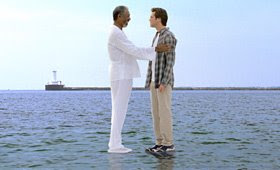 Movies' 'Magic Negro' Saves the Day, but at The Cost of His Soul


Morgan Freeman plays God in "Bruce Almighty; " [pictured above] Laurence Fishburne a demigod in "The Matrix Reloaded, " and Queen Latifah a ghetto goddess in "Bringing Down the House. "
What's the deal with the holy roles?
Every one of the actors has to help a white guy find his soul or there won't be a happy ending. Bruce (Jim Carrey) won't get the girl. Neo (Keanu Reeves) won't become the next Messiah. And klutzy guy Peter (Steve Martin) won't get his groove on.
In movie circles, this figure is known as a "magic Negro, " a term that dates back to the late 1950s, around the time Sidney Poitier sacrifices himself to save Tony Curtis in "The Defiant Ones. " Spike Lee, who satirizes the stereotype in 2000's "Bamboozled, " goes even further and denounces the stereotype as the "super-duper magical Negro."
[Filmmakers] give the black character special powers and underlying mysticism, " says Todd Boyd, author of "Am I Black Enough for You? " and co-writer of the 1999 film "The Wood. " "This goes all the way back to 'Gone with the Wind. ' Hattie McDaniel is the emotional center, but she is just a pawn. Pawns help white people figure out what's going wrong and fix it, like Whoopi Goldberg's psychic in 'Ghost. ' "
It isn't that the actors or the roles aren't likable, valuable or redemptive, but they are without interior lives. For the most part, they materialize only to rescue the better-drawn white characters. Sometimes they walk out of the mists like Will Smith's angelic caddy in "The Legend of Bagger Vance. " Thanks to Vance, the pride of Savannah (Matt Damon) gets his "authentic swing" back.
﻿
﻿﻿﻿﻿﻿
﻿﻿﻿﻿﻿A case of the yips hardly seems to call for divine intervention, but then neither does Carrey's crisis in "Bruce Almighty. " He's a TV funny guy who wants to be a news anchor. After he loses out to another contender, he verbally lambastes the Lord (played by Freeman with as much dignity as he can muster), and the Lord takes an interest.

Above editorial from DV Republic, “The liberated zone of cyberspace.”  http://www.dvrepublic.org/
Cartoon by: http://www.blackcommentator.com/
Posted by Dankwa Brooks at 9:52 PM