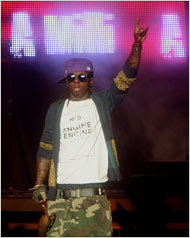 Music Review Lil Wayne
Pop Phenomenon, and Chairman of His Board
By JON CARAMANICA-New York Times

WANTAGH, N.Y. — One of the most difficult aspects of being the boss is controlling the message. Take Lil Wayne. By the time his Young Money Presents: America’s Most Wanted Music Festival tour arrived at the Nikon at Jones Beach theater here on Saturday (pictured left) almost everyone in attendance surely knew that his protégé Drake, the quickest-rising star hip-hop has seen in several years, had the night before fallen onstage in Camden, N.J., and injured himself.

Video and photos of the incident flooded rap blogs, showing Drake slumped on the ground, then being carried off stage while his song “Best I Ever Had” blasted in the background, and Lil Wayne, caught off guard, joked, “I’m going to have to get some extra insurance.”

Just hours after the fall Drake posted an all’s-well message on his Twitter page, but he had been beaten to the punch. By then someone had given his wounded knee its own Twitter account (twitter.com/drakesknee), with a slew of hilarious mock-Drake rhymes: “woke in a daze bright lights feelin weaker/feelin like wayne put oil on my sneakers.” Thirty-six hours after the first tweet it had more than 2,000 followers.

Lil Wayne probably wasn’t amused, though: suddenly he was a salesman without his biggest product to hawk. And on this tour, essentially a roadshow for Lil Wayne to show off himself and the brood of artists signed to his Young Money label, presenting Lil Wayne the macher was as important as seeing Lil Wayne the artist, if not more so. (Also on the bill were the R&B singers Jeremih and Pleasure P and the rappers Soulja Boy and Young Jeezy.)

Early last year, as Lil Wayne was completing his climb from Southern rap star to global pop phenomenon, it wasn’t clear that he was prepared for the transition. Various stripes of erratic behavior seemed primed to undo him.

But the Lil Wayne who appeared on Saturday was a model of reliability and efficiency: a master rapper in control of his art and an executive ensuring his business interests were protected. If anything, this was a show remarkable for its unremarkableness. Lil Wayne once thrilled with the possibility of calamity, but there was no such edge here. He moved swiftly and lucidly through most of the songs from last year’s breakthrough album “Tha Carter III” (Cash Money/Universal) and several older hits. Occasionally there were inspired flourishes: during the raunchy “Mrs. Officer,” Lil Wayne was fake handcuffed and frisked by dancers dressed as S&M cops; and at the outset of the depressive “Shoot Me Down” he set his sunglasses on top of his head, one of the few moments all night you could see his eyes.

When it came time for him to introduce his label signees he did so as if announcing the lineup at a baseball game, giving each artist time to perform one song (except for Nicki Minaj, who got two). Jae Millz was limber, Gudda Gudda monotone and T-Streets discomfitingly raw. Tyga, nearly strangled by his skinny jeans, was spastic. Most exciting were Young Money’s pair of kid rappers, the hot-stepping Lil Chuckee and the eccentric Lil Twist. (Wayne too started young; he has been releasing records since his early teenage years.)

When it came time to address Drake’s absence, Lil Wayne was direct. “We had a technical difficulty yesterday,” he announced. Drake, he said, was headed to surgery the next day: “Y’all keep him in your prayers.”

And when Lil Wayne segued into “3 Peat,” the opening track from “Tha Carter III,” it seemed as if that might be all that was said on the matter. But at the show’s end the entire Young Money crew emerged to perform “Every Girl,” one of the songs that has helped Drake achieve hip-hop ubiquity. After rapping his own verse, Lil Wayne, with a leopard-print bra tossed to him from the crowd slung over his shoulder, tore through Drake’s lines with glee while the crowd out-shouted him: just another businessman protecting his brand.

Cool Black's Mad Definition Link: In case ya don't know what HNIC means, you can read the defintion here

You can see the video of the fall below WARNING EXPLICIT LANGUAGE:
Posted by Dankwa Brooks at 7:28 AM