Former UFC world lightweight champion Quinton 'Rampage' Jackson (pictured left) is set to star in the TV-to-film adaptation "The A-Team." Jackson will step into the role made famous by the iconic Mr. T.

Joe Carnahan will direct and polish the Skip Wood's script along with writer Brian Bloom. Ridley and Tony Scott are producing the big-screen adaptation..

Shooting begins in the fall in Vancouver.

The film is expected to open in theatres on June 11, 2010.
Cool Black's Mad Commentary: While the remakes of all of my favorite shows as a kid (Duke's of Hazzard, Knight Rider) SUCKED, these filmmakers (director and producers) got skills and the newest castmember...Uhmm he got the look.
The First Official Photo From 'The A-Team'
October 23, 2009 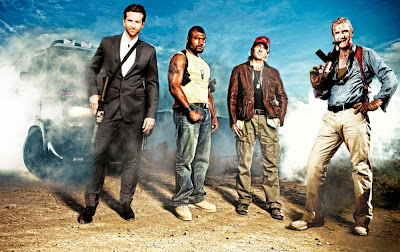 Posted by Dankwa Brooks at 4:48 PM