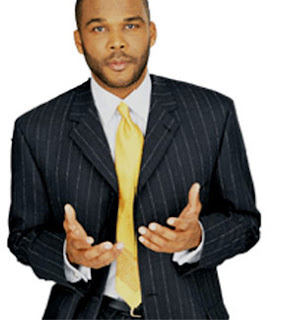 LOS ANGELES (Reuters) - Prolific filmmaker Tyler Perry (pictured left) scored his second No. 1 movie of the year at the North American box office on Sunday, leading a weak field of newcomers in what is traditionally one of the industry's slowest weekends.

Perry's latest family comedy, "I Can Do Bad All By Myself," sold $24 million worth of tickets during the three days beginning Friday, distributor Lionsgate said.

The writer-producer-director-actor, whose low-budget films are popular among black women, did better in February with "Madea Goes to Jail," which opened to a personal best of $41 million. But exactly a year ago, Perry's "The Family That Preys" opened to $17 million. The two most recent films starred Perry's alter ego Madea, a pistol-packing granny.
Posted by Dankwa Brooks at 9:47 PM