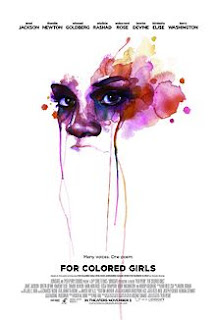 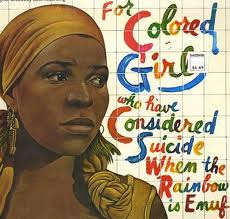 Summary: For Colored Girls is a 2010 American film directed, produced, and written by Tyler Perry. It is an adaptation of Ntozake Shange's 1975 stage play For Colored Girls Who Have Considered Suicide When the Rainbow Is Enuf (pictured right). Structurally, For Colored Girls... (1975) is a series of 20 poems, collectively called a "choreopoem."

A choreopoem is a work that combines dance and poetry so that each complements the other in a highly dramatic way. The term first appeared in the orginal For Colored Girls... (1975), by Ntozake Shange, an African-American woman. Shange, (Paulette Williams was her birth name), wanted to create a new art form that was different from traditional western (and white) poetry. So, while working with young black girls, she developed the form, which doesn't contain traditional elements of plot and characters, it instead focuses on creating an emotional response within the audience. -Lord Nathan, everything2.com

For Colored Girls... (1975), is performed by a cast of seven women characters,each of whom is known only by a color: "Lady in Yellow," "Lady in Purple," etc. In this 2010 adaptation, since this is a movie, it is structured around a "six degrees of separation" type of storyline.

REVIEW by Cool Black
This is a really good film. I’m not familiar AT ALL with the source material (1975 stage play) so this is my first exposure to it and I have to say Mr. Perry did a really good job. As stated in the summary above all of the characters in the “choreopoem” are “structured around a "six degrees of separation" type of storyline.” And that is effective as well. The poems will make themselves evident without seeming out of context. There is no blank background or weird camera angle or lighting to let you know “this is one of the poems”, they just become a part of the scenes like a character’s monologue or soliloquy.

The performances in this film are on the most part EXCELLENT, a word I never use lightly. The standout performances are Phylicia Rashad, Thandie Newton and Kimberly Elise. The rest of the cast do great jobs as well including Kerry Washington, Anika Noni Rose, Janet Jackson, Whoopi Goldberg, Loretta Devine and Tessa Thompson.

Lastly I have to give props to Mr. Tyler Perry who directed, produced, and wrote this film and did a great job at adapting a choreopoem that "doesn't contain traditional elements of plot and characters" into a motion picture.

In an October 2010 press conference with the cast, Perry credited his full body of work for being able to make the film, stating, "It took everything – Madea, House of Payne and all of that for me to be able to do For Colored Girls. Had none of that happened I wouldn’t have been able to say, “Listen, this is what I want to do next,” so I’m very proud of it all." ( UrbLife.com)


I totally agree with Mr.Perry.


Cool Black's Mad Commentary: I heard Oprah Winfrey say this film is having “Oscar buzz” and I thought blah, blah, blah, Oprah is Tyler Perry’s good friend so of course would throw terms like that out there.


Well I have to agree with Ms. Winfrey, I think the acting in this film will get several Oscar nominations. In particular I’m going to state NOW several months before the actual nominations that Phylicia Rashad, Thandie Newton and Kimberly Elise will get nominations. Since this is an ensemble piece probably for Best Supporting Actress, but Kimberly Elise might get a Best Actress nomination since she is heavily featured. Janet Jackson who also did a great job might get a nomination because she is a really famous person who did a really good job. Oscars are a popularity contest as well.

Additional quote-
Manohla Dargis of the New York Times published this November 4, 2010 in the review for 'For Colored Girls'.

As it turns out, Mr. Perry, while busily establishing his economic independence, has been finding his voice as a filmmaker. And here, working with fine performers like Ms. Elise, Anika Noni Rose, Phylicia Rashad and Kerry Washington, he sings the song the way he likes it — with force, feeling and tremendous sincerity.

I totally agree with this one as well.-Cool Black 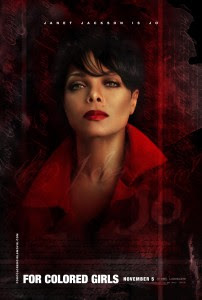 Posted by Dankwa Brooks at 7:54 AM