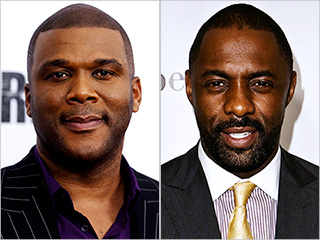 Last August, when news broke that The Wire‘s Idris Elba was to follow in the footsteps of Morgan Freeman (Kiss the Girls and Along Came a Spider) and reboot the James Patterson detective character Alex Cross on the big screen, we were psyched — and this was before we’d seen his Golden Globe-nominated turn as a detective in the miniseries Luther. EW chatted with Elba last October about the film, which was to then have been directed by David Twohy (A Perfect Getaway, Pitch Black), and all he would reveal was that the script was “phenomenal” and if he could pick his dream costar/nemesis, it’d be Joaquin Phoenix. So cut to the news today that cameras will be rolling this June on I, Alex Cross with Tyler Perry in the titular role and director Rob Cohen (The Fast and the Furious and xXx) at the helm. What happened?

Elba’s rep had no comment, but Bill Block, CEO of QED International (District 9), which acquired the rights and the initial script by Kerry Williamson and Patterson late last year (and hired Marc Moss, who worked on the previous Cross films, to refine it for Perry and Cohen), just filled us in: “When we came on, we looked at it freshly, and just built it from the bottom up,” he tells EW. “Sure, Idris is a great actor; Tyler Perry is a phenomenon. Tyler Perry is one of the most significant entertainers in all of media. He is a huge cross-media talent and presence — and he’s a terrific actor whose range is going to be shown here. You’re going to see Tyler Perry like you haven’t seen him. He’s 6’5″, he is a linebacker. He is an awesome physical presence and is just going to tear it apart here. It’s an intense, dramatic role.” Block says the film — “a kickass, crusading action picture” — will be the first of several Alex Cross films. “This is going to be the new Tyler Perry franchise, a worldwide one,” he says. “That’s the other thing: Tyler Perry is going to take this to the worldwide audience. It’s just a very different, much bigger opportunity.” (It’s worth noting that Block was, in fact, phoning us as he arrived at the airport, about to fly to the European Film Market in Berlin to sell global distribution rights.) “We went to him,” Block says. “If you can get Tyler Perry or Will Smith, you try.”

Now I imagine most people, myself included, think of Elba and Perry as being two very different actors, and naturally find this to be a bemusing, almost amusing turn of events. The question is: Are you more or less interested in the film now? With Elba, I was looking forward to him getting a quality leading man role with mass appeal and bringing some heat. With Perry, I’m curious to see how he’ll handle a serious car chase (I assume there will be one), and whether his Madea fans will follow him when the makeup in the movie isn’t drag but deadly. Yes, we’ll all be dying to see the trailer. But is it the kind of curiosity that’s satisfied in two minutes or two hours?

While you ponder those questions, I’ll leave you with this: You can critique an actor’s performance after the film opens, but you can’t ever fault someone for wanting to try something new and show his range. I have no idea what kind of relationship Elba has with Perry, who directed him in 2007′s Daddy’s Little Girls, but that notion is something I’m confident Elba would agree with (at least on some level). Talking to us last October about the diversity in his credits, Elba said, “I would never be fearful of any character. I think there’s a tendency for actors like myself, and I don’t mean to generalize myself, but I’ve played ‘men’s men,’ if you will, characters that are simmering [with] rage and calculated. There’s a trend not to play anything that is opposed to that. I remember when I left Stringer [on HBO's The Wire], one of the films I did was Tyler Perry’s Daddy’ Little Girls, which was about a man doting over his three little girls. I remember there was talk, ‘Why? Why would you do that? Play gangsters. Play ruthless.’ It’s really funny because the same people who loved me as Stringer Bell were the same people that were watching Daddy’s Little Girls literally in tears. Some people don’t like the film, but some of the guys that came up to me and said, ‘Yo, I want to see you play gangsters’ were the same ones that were in tears because they had either strained relationships with their children, or they loved their children so much and they were watching a character that they could relate to. I don’t mind playing characters that are opposite of what people think I am.”

Posted by Dankwa Brooks at 3:09 PM