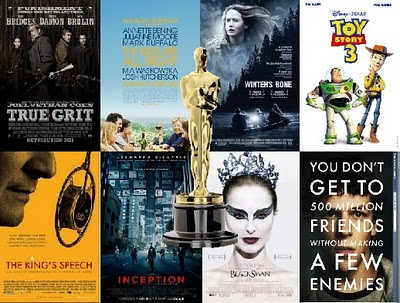 Of the ten pictures nominated for "Best Picture" I have seen eight of them and they are (pictured above left to right, top, True Grit, The Kids Are All Right, Winter's Bone, Toy Story 3, (left to right, bottom)The King's Speech, Inception, Black Swan and The Social Network.) My picks for the Oscars will be from those pictures. (I will also bold the correlating nominations.)

My pick will be under “Cool Black’s Oscar Pick:” These are NOT who I think will win; it’s who I think SHOULD win based on my opinion and those who know me, know I am quite discerning.

The Kids Are All Right – Lisa Cholodenko and Stuart Blumberg

Cool Black’s Oscar Pick: Christopher Nolan for Inception. Of the original screenplays Inception was just a trip…a mind trip and while it was full of hard to grasp concepts it had an underlying storyline that was pretty easy to follow.

Cool Black’s Oscar Pick: Absolutely, absolutely, absolutely Aaron Sorkin for The Social Network. Sorkin wrote one of the smartest screenplays in modern history. Not only is it smart, it made “geek speak” not so boring by combining it with whip fire dialogue, wit and sarcasm.

Cool Black’s Oscar Pick: (Cinematography is the making of lighting and camera choices when recording photographic images for the cinema. It is closely related to the art of still photography.)

Hard, hard category. Having seen all of these pictures I’m going to say that ALL are worthy nominations, but I have to go with a TIE for Wally Pfister for Inception and Danny Cohen for The King's Speech.


Mark Ruffalo – The Kids Are All Right as Paul

Cool Black’s Oscar Pick: I refuse to pick Hailee Steinfeld in this category because I stated above she deserved to be in the “Best Actress” category so I’m going with Helena Bonham Carter for The King's Speech as Elizabeth Bowes-Lyon / Queen Elizabeth.

Cool Black’s Oscar Pick: I heard this category referred to as Colin Firth and everyone who will lose against him. I totally agree. PITCH PERFECT acting!

Annette Bening – The Kids Are All Right as Nic

Cool Black’s Oscar Pick: First, I totally have to say that Hailee Steinfeld (the little girl from True Grit) deserves to be in this category! She was absolutely fantastic in that film and had such a large role (like every scene). She was nominated for “Best Supporting Actress” for that role, but…I just don’t have the words.

Anyway, my picks are again a TIE Jennifer Lawrence for Winter's Bone as Ree Dolly and Natalie Portman for Black Swan as Nina Sayers.

Natalie Portman did give the performance of her career, but so did Jennifer Lawrence. While Natalie’s was frenetic, Jennifer’s was just the embodiment of distress.

Cool Black’s Oscar Pick: Not really a hard choice, I think all four I did see did great jobs, but my pick is David Fincher for The Social Network.


The Kids Are All Right – Gary Gilbert, Jeffrey Levy-Hinte, and Celine Rattray

Cool Black’s Oscar Pick: Like I stated at the beginning, I have seen eight of these ten pictures and each one worthy of the nomination. While I personally thought Inception and The Social Network were the best films I saw last year I have to pick The Social Network as Best Picture.

So that’s it, my picks this year with only two travesties Hailee Steinfeld not nominated for “Best Actress” and Christopher Nolan not nominated as “Best Director” for Inception.


*UPDATE APRIL 2011*
Now that I have seen ALL TEN of the Best Picture nominees I do have TWO changes and they are both from The Fighter.