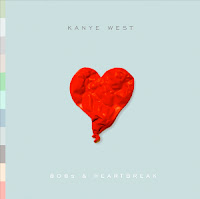 Three years later I finally listened to 808s & Heartbreak. I already bought two singles from the album, but not the whole.

808s & Heartbreak is the fourth studio album by American hip hop artist Kanye West, released November 24, 2008 on Roc-A-Fella Records in the United States. Recording sessions for the album took place at Glenwood Studios in Burbank, California and Avex Recording Studio in Honolulu, Hawaii during September to October 2008. It was primarily produced by West, No I.D., and Jeff Bhasker. Conceived in the wake of multiple events that affected and distressed him during the previous year, 808s & Heartbreak marked a major musical departure for Kanye West from his previous work, lyrically, vocally, and production-wise.

Classified by West as a pop album, 808s & Heartbreak incorporates elements of synthpop, electronica, R&B, and electropop, while its tracks are primarily sung rather than rapped by West and contain lyrical themes such as love, loneliness, and heartache. The album also contains extensive use of the Auto-Tune voice processor and the Roland TR-808 drum machine, which was utilized and manipulated by West to produce a distorted, electronic sound. Approaching the album's production in a minimalist fashion, West intended to contravene the typical sound of hip hop beat and instead evoke a presence of tribal drums.
- Wikipedia

#np Finally played #Kanye's '808 & HEARTBREAK' all the way through and while I like a lot of things about it, I can see where a lot has to "grow on you".

The main thing I walked away with from this album was that IT IS way experimental and will make GREAT fodder for DJ remixes and media FILM & TV scores.

Kanye was and always be a genius producer and this album is no different!

Posted by Dankwa Brooks at 8:23 AM