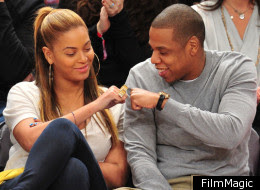 We expect the glamorous couple to celebrate this particular anniversary in big way, considering their well-documented love for the number "4" (it's the fourth month of the year, on the fourth day and each have the roman numeral of the all-important number tattooed on their left ring fingers).

Although the traditional wedding anniversary gift for four years is something silk or linen (boring), we're thinking the superstars will go with something a lot more flashy. Maybe a 4-carat diamond ring for Bey and four blinged out Rolexes for Jay?

But, whatever the couple decide to get one another we're sure it will be amazing.

But, nothing will top the ultimate gift the twosome received this year...their darling daughter, Blue Ivy (another clever "4" reference). Definitely another reason to raise a glass extra high tonight.

And while marriage and parenthood can change a lot of things--sleepless nights, changing dirty diapers during concert intermissions or perhaps even cleaning spit-up off of Chanel couture-- the First Family of hip-hop has handled it with grace and plenty of swagger.

Bey and Jay have proved that not much has changed since entering into holy matrimony on April 4, 2008--they are still selling out stadiums, popping bottles with billionaires and pretty much working towards world domination.

So in celebration of Mr. and Mrs. Carter's 4th anniversary, here's a look at our favorite moments of the duo canoodling courtside, working the red carpet and just being super cute. (At the bottom of the page here)