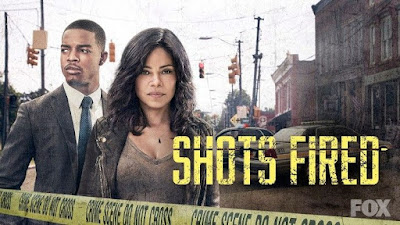 About the show:
When an African-American police officer kills an unarmed white college student, a small town in North Carolina is turned upside-down. Before the town has a chance to grapple with this tragedy, the neglected murder of an African-American teen is brought to light, re-opening wounds that threaten to tear the town apart. Leading the Department of Justice’s inquiry into these shootings is seasoned investigator ASHE AKINO (Sanaa Lathan, “The Perfect Guy”) and a young Special Prosecutor, PRESTON TERRY (Stephan James, “Race,” “Selma”), both of whom are African-American. As they start to pull back the layers of both cases, they suspect a cover-up that may involve some of the state’s most powerful people, including fiercely political North Carolina Governor PATRICIA EAMONS (Academy-, Emmy- and Golden Globe-winning actress Helen Hunt, “As Good As It Gets,” “The Sessions”). She’s in a tough re-election fight, and the recent shootings in her state are making it even tougher. Meanwhile, real estate mogul and owner of a privatized prison ARLEN COX (Academy- and Golden Globe Award-winning actor Richard Dreyfuss, “The Goodbye Girl,” “Jaws,” “Madoff”), is pulled into the case, as LT. ERIC BREELAND (Stephen Moyer, “The Bastard Executioner,” “True Blood”), a seasoned veteran in the town’s Sheriff’s Department, gets caught in the middle of the investigation. SHOTS FIRED tackles the racial divide from all perspectives. As Ashe and Preston navigate the media attention, public debate and social unrest that come with such volatile cases, they learn that everybody has a story, and that the truth is rarely black and white.

Below is a playlist of all the aftershows in reverse order starting with the latest to the first episodes.

Email ThisBlogThis!Share to TwitterShare to FacebookShare to Pinterest
Labels: video