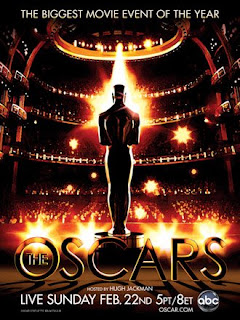 Well the 81st Annual Academy Awards were definitely scaled down. The producers said they were trying something different and they did. What resulted didn’t seem like the biggest night in Hollywood to me. The stage was right in the audience’s lap and the usually lame musical numbers were…usually lame. Hugh Jackman is great, but when Beyonce can’t even make a musical number better, it’s bad. The FOW (Former Oscar Winners) presenting the acting awards was a nice idea, but when a FOW can’t read a teleprompter it became awkward. The best speeches from a FOW were the ones that seemed from the heart and not read.

Aside from the actual ceremony, the best moments were Heath Ledger’s and Kate Winslet’s wins. Heath Ledger’s acting has been excellent and his work as the Joker in TDK (The Dark Knight) was no different. I’ve only seen him in two previous films, Monster’s Ball and Brokeback Mountain, but he was excellent in both. When I watched him in TDK he wasn’t an actor playing a looney bin, he was just a looney bin. When an actor makes you believe in a character and makes you forget they are “acting” THAT’S ACTING.

Kate Winslet has been equally excellent for a long time. I’ve also only seen her in a few films, Titanic (of course), Eternal Sunshine of the Spotless Mind and The Life of David Gale where she played “Bitsey Bloom”. The Life of David Gale was a horrible movie, but her performance was the best thing about the film and I said the film should have been called “The Life of Bitsey Bloom”. Congratulations to her, finally.

The winners in two of my favorite categories were:
ORIGINAL SCREENPLAY
Dustin Lance Black for "Milk"

I kind of have my own personal backlash against Slumdog Millionaire. I probably would never watch a movie like this, just not my cup of tea, and all of the hype about it doesn’t endear it to me. I’ll probably watch it on DVD to see what all the hype is about, but I’m not rushing out to see it. Congratulations to it though for it is a true underdog story and congrats to all of the winners. Here’s to next year.

In case you missed it a list of the major winners followed by the funniest moment of the night.

LEAD ACTRESS
Kate Winslet in "The Reader" (The Weinstein Company)

Nice summary! I didn't get to watch the show so it was good to get the highlights!