MARCH 5--In case you seek more information about the singer Rihanna's alleged beating at the hands of her boyfriend Chris Brown, a Los Angeles search warrant application further details the February 8 incident involving the chart-topping singers. In a sworn affidavit, LAPD Detective De Shon Andrews provides an account of the attack based on Rihanna's statements to police. The search warrant affidavit, a copy of which you'll find below, was filed to secure cellular phone records for Rihanna, Brown, and one of Rihanna's personal assistants. According to the affidavit, Brown sought to push Rihanna out of his rented Lamborghini during an argument, and banged her head against the car's passenger window. He then allegedly punched her repeatedly and warned, "I'm going to beat the shit out of you when we get home! You wait and see!" Bloodied, Rihanna reportedly then called her assistant Jennifer Rosales and left a message asking the aide to call police.

Brown responded, the affidavit notes, by saying, "You just did the stupidest thing ever! Now I'm really going to kill you!" Rihanna, whose full name is Robyn Rihanna Fenty, is referred to in the affidavit as "Robyn F." Brown was charged today with assault and making a criminal threat, both felonies, and is expected to be arraigned later today In L.A. Superior Court. Brown's phone records are of particular interest to LAPD investigators since a second Rihanna assistant, Melissa Ford, told Det. Andrews on February 17 that she had received a text message from Brown apologizing "for what he had done to Robyn F. and advised Ford that he was going to get help." The text message, Ford told cops, came from a number she recognized as Brown's. A call today to that number, which carries an area code from Brown's home state of Virginia, was immediately forwarded to an "automated voice messaging system."
Below the now infamous leaked photo 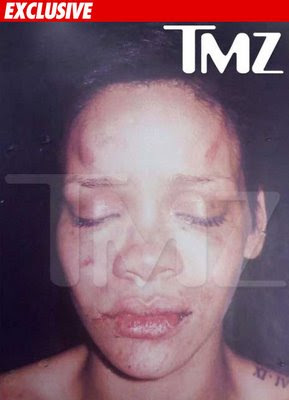 Posted by Dankwa Brooks at 3:54 PM

I say you (Dankwa) should write a MOVIE about this kind of mess...is this really what love does to you? If so...NO THANK YOU..I'm good!