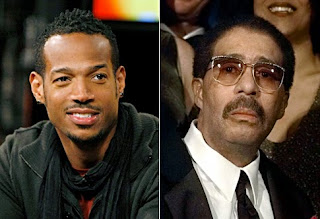 Comic actor Marlon Wayans' (above left) next screen role could turn out to be portraying a real-life comedy icon.
EW.com reports that Wayans is in talks to play Richard Pryor,(above right) the groundbreaking comedian whose troubled life will be depicted in an upcoming biopic, "Richard Pryor: Is it Something I Said."
Wayans is reportedly being considered for the part after fellow funnyman Eddie Murphy dropped out of negotiations early on. The film was written and will be directed by Bill Condon of "Dreamgirls," who originally shopped it as a vehicle for Murphy.
Sources told EW.com that Wayans, best known for such over-the-top comedy films as the "Scary Movie" franchise and "White Chicks," impressed producers in a 13-minute screen test in which he "transforms into Pryor."
The Pryor project, scheduled to begin shooting in the spring, is being made by Sony Pictures and Adam Sandler's production company. Variety.com reports that Sandler is considering playing a small role as Pryor's first agent.
Budgeted at about $20 million, the movie will cover Pryor's controversial life and career as a raunchy standup, beloved movie star and troubled drug addict who famously set himself on fire while freebasing cocaine.
Pryor died in 2005 at age 65 after a series of health problems, including multiple sclerosis.

Cool Black's Mad Commentary: I think Marlon is one of the most (if not THE most) talented of the vast Wayans clan. I've seen him do drama (Requiem for a Dream) and he was pretty good. I would like to see what he does with the role.

Posted by Dankwa Brooks at 9:39 PM