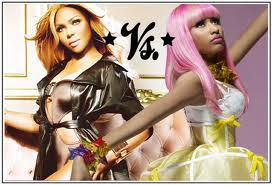 Lil' Kim Explains Nicki Minaj Battle: 'I Have To Fight For My Fans'
'They thought I was gonna sit back and let them do what they were doing,' MC tells 'RapFix Live' about Nicki's crew.

MTV News
By Jayson Rodriguez with reporting by Sway Calloway

Lil' Kim wanted deference from Nicki Minaj. Now, however, it may take much more than that from the upstart who was inspired by the veteran rapper.

The two female MCs have been bickering for some time, in interviews and in song, (see next article below) but it seems Kim may want a 50 Cent-to-Ja Rule knockout blow, stopping the Young Money raptress in her tracks.

"This is the thing: It's just, it's really, like, at the end of the day, I do what I have to do, and I'm gonna keep doing what I have to do," Kim told MTV News during her appearance Thursday (March 3) on "RapFix Live." "I'm gonna do me. They're the ones that brought this about. It could have been that simple. But what they did was underestimate me. They thought I was gonna sit back and let them do what they were doing. I'm gonna let everybody know: I'm on my Hollywood sophisticated, but I'll bring it back if I have to. And that's in life. I can't help it. I'm G'd up from my feet up. If I have to handle my business, I'mma handle my business. And I have to fight for my fans."
﻿﻿﻿ ﻿﻿﻿
﻿Kim claimed her battle against Nicki is a challenge because she "has a powerful building behind her," referencing her label, Universal Records. But Kim remains resilient, saying her battle is for her fans as much as it's against Nicki. 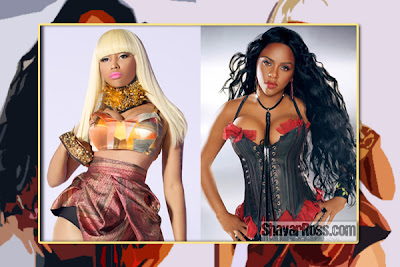 The battle of the Barbies continues: Lil' Kim and her open war on reigning queen of hip-hop Nicki Minaj has not lost a bit of steam after last week's release of a video in which the former Junior M.A.F.I.A. vet continues to discredit the Young Money starlet.

The Brooklyn rap diva isn't slowing down her relentless attacks on Nicki. The 15-minute "Carbon Copy," called "a documentary exposé about crazed fans with record deals," shows some of the many incarnations of Kim's image over the course of her 17-year career and how Minaj seemingly borrowed some of the looks as her own.

The 35-year-old Kim claims Minaj has been disrespectful after hearing her say during a radio interview that veteran female rappers need to move aside. Using those comments as inspiration, the rapper born Kimberly Jones has taken up a crusade that has morphed into an entire mixtape project devoted to dismantling the Nicki Minaj machine. Kim reported that her Black Friday sold 113,000 copies in 28 hours after she released it February 14, but because she sold it herself using PayPal, there is no way to confirm that number.

﻿ ﻿ The cover of Black Friday (pictured right) shows Kim, bloody sword in hand, next to a pink-haired severed head and a dismembered body wearing the same outfit as Nicki on her Pink Friday cover. Before the mixtape's release, Kim leaked "Pissin' On Em" (to the tune of Nicki's "Did It On Em"), which accuses Minaj of being a "Lil' Kim clone."

And the war of words hasn't been confined to studio recordings: Kim also took to airing her grievances in print via a recent interview with Rap-Up. "People gotta know that I'm not stupid, but I'm having fun. I'm protecting my brand and my empire at this moment," she said. She added, "If this situation is deeper than what everybody would like to think it is, then it will all come to light. I'm a strong believer in how I conducted my strategy with this whole situation."

This isn't Kim's first foray into the circus of hip-hop beefs. The "Get Money" MC is still in somewhat of a feud with fellow Brooklyn artist Foxy Brown, who has been largely inactive aside from a track aimed at Kim released earlier this year. While she hasn't injected herself into the squabble between Kim and Nicki, Foxy has openly sided with her Trinidadian peer Minaj. 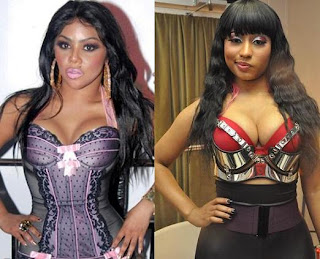 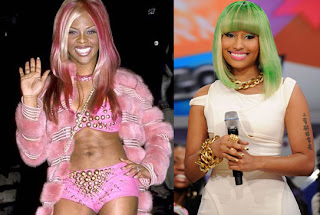 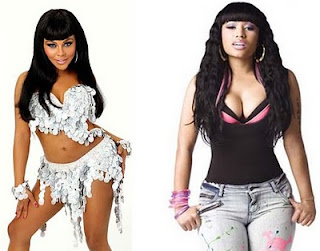 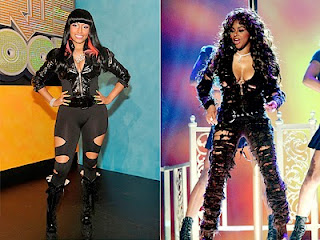