The High Cost of the Oscars 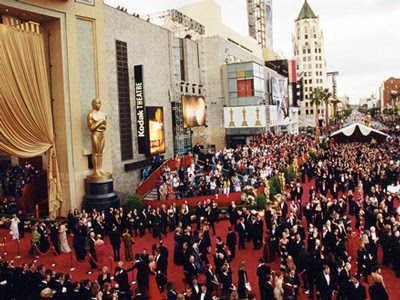 Director Frank Capra may have called the Oscar “the most valuable but least expensive item of worldwide public relations ever invented by any industry." But producing Hollywood’s biggest night of the year hardly comes cheap. From the lavish food and drink to the gold-plated statuettes themselves, little expense is spared to make this night an entertainment extravaganza, not to mention the economic boost it gives to the city of Los Angeles – over $130 million. Here are a dozen surprising ways money is spent on the Academy Awards.

From full-page ads in Variety and The Hollywood Reporter to swanky parties and screenings, studios spare little when it comes to championing their films for a best picture win. “The money spent is directly proportional to the ambition,” says a publicist who has worked on several campaigns. “A tiny indie could run a million, while a film like The Social Network could go as high as 15 million or more.”

Oscar invitees sign a release promising not to resell or give away their coveted seats to the show—but that hasn’t always stopped scalpers. In a 2008 lawsuit, the Academy accused two companies of trying to hawk tickets for as much as $85,000 a pop. In 2009, the Academy brought another suit against an Arizona-based firm that advertised a seven-day trip to Hollywood that included an Oscar ticket, accommodations at the Bel Air hotel, a strut down the red carpet, and other cushy perks for $175,000.

Several invite-only gifting suites where stars are lavished with vacations, jewelry, skincare treatments, and other pricey perks are held the week of the awards. So even the losers end up winning: This year, Distinctive Assets, a Los Angeles-based marketing company, will send each Oscar nominee $75,000 worth of swag the morning after the show. Standouts include a getaway to the Maldives worth $16,000 and a six-month gym membership.

Moët & Chandon is providing the bubbly at this year’s official “after” party, the Academy Awards Governors Ball. Organizers expect more than 1,200 bottles of the brand’s Imperial selection to be served, and at $34.99 each, that’s nearly $42,000 of sparkling wine swilled and savored.

The Oscars’ red carpet is an impressive 500 feet long and 33 feet wide—or 16,500 square feet. A spokesperson for Beverly Hills-based Red Carpet Systems says they would charge $7,500 to rent a red carpet that length at their standard width of just ten feet wide. In fact, most L.A.-area companies that provide the service charge an average of $1 and $1.50 per square foot of carpet. At that rate, the Academy’s walkway could cost as much as $24,750 before taking into account set-up fees, which can also be hefty. Red Carpet Systems says a project the size of Oscar’s could require a crew of about 16 men for four days, and at California’s minimum wage, the labor alone would cost another $3,768.

Master chef Wolfgang Puck has long been the creative force behind the Governors Ball menu. This year’s offerings include heaping tubs of caviar, gold-coated chocolate Oscars, and the most decadent ingredient of all: black truffles. Puck will shave them on pizzas and in a truffle aioli paired with asparagus, Iberico ham, and mizuna leaves. He plans to use about 25 pounds of the fungi—at $1,000 per pound.

On Oscar day, the most in-demand hairstylists, spray-tanners and makeup artists are dispatched to the homes of A-list stars. Top coiffeurs like Oribe reportedly command $5,000 per day—plus gratuity—with a complete hair and makeup team billing as much as $10,000. Add in the cost of eyelash extensions (up to $450), an in-home luxury mani/pedi ($250) and spray tanning by Hollywood favorites like Jimmy Coco ($125), and the total can easily creep beyond the $10K mark.

Most major celebs don’t pay for their red carpet dresses or diamonds: They borrow the pricey pieces from designers and jewelers. Still, it takes a top-notch wardrobe stylist to select the perfect look and negotiate those loans with fashion houses. Some of Hollywood’s top names, such as Rachel Zoe, command day rates between $4,000 and $6,000 for their services, a tab frequently footed by the movie studio, not the starlet.

Most high-powered A-listers use a bodyguard on a daily basis, but for a special event, they ramp up the protection. Aaron Cohen, founder of IMS-Security and author of Brotherhood of Warriors, has protected stars at previous Oscars. “A celebrity like Angelina [Jolie] will probably have ‘her guy,’ for lack of a better term, and one advance scout to coordinate before she arrives with on-site security,” he says. “They help handle the actual carpet drop with the protective agent, who would then arrive with her.” The cost for this 007-style service? From $2500 to $3000.

For leading men who want to get in shape fast, military-inspired classes at gyms like Barry’s Bootcamp run about $600 for a package 50 sessions. For one-on-one attention, some of Tinseltown’s most coveted trainers charge about $3,000 per private session. Meal delivery services and cleanses are also popular last-minute fixes. A three-day supply of detox juices from BluPrintCleanse runs $195, while Paleta, an organic food service in Los Angeles and New York City, charges $485 a week.

With red-carpet arrivals starting in the afternoon and after parties stretching well into the wee hours, the cost of a chauffeured car on Oscar night can rival a mortgage payment. A 2:00 p.m. pick up and 2:00 a.m. drop off will break the $1,000 mark at most L.A. car services. Most companies charge $65 an hour, plus a 20 percent gratuity and additional service and fuel charges. Spring for the stretch limo that seats eight closes friends, managers, agents, and publicists—and you’re looking at as much as $3,750.

Each eight-and-a-half-pound Oscar is cast in brittania metal and plated in copper and nickel silver before the finishing touch, a layer of 24-karat gold, is applied. Each statuette costs $500 to produce. While it’s difficult to know exactly how many awards will be handed out in any given year, at least 25 Oscars—$125,000 worth—will be presented on Sunday night’s show.

Posted by Dankwa Brooks at 8:23 AM

Want To Boost Your ClickBank Traffic And Commissions?