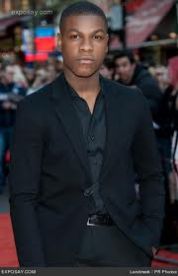 Fresh off its pilot pick up, HBO has cast the lead and three supporting players in its Spike Lee boxing drama Da Brick.

Boyega will play Donnie, who, after his release from juvenile detention on his 18th birthday begins an exploration of what it means to be a man for himself and those around him.

Milauna Jemai (NCIS, pictured left) will play Lynette, Donnie's mother, with him he reconnects with following a 14-month separation.

Julito McCullum (The Wire, pictured below right) will play Kevin, Donnie's best friend and the one person he can't leave behind, no matter how much h

e may want to.

Kamahl Naiqui Palmer (Gossip Girl) is set as Malik, the moral center of Donnie's tight group of friends who is looking for direction between his middle-class upbringing and the harder realities of his environment.

Da Brick is described as a contemporary exploration of what it means to be a young, black man in a supposedly post-racial America.

The project hails from Lee and L.A. Riots' John Ridley.

Lee is set to direct with Ridley on board to write and serve as showrunner.

It will be set in Newark, N.J., which is often dubbed "Brick City."

Much as Entourage was inspired by producer Mark Wahlberg's life, Da Brick will reflect aspects of Tyson's upbringing. It marks the latest in a string of Hollywood projects for Tyson, who has turned up in the Hangover franchise as well as Animal Planet's Taking on Tyson. Last season, he added a cameo on Entourage to his resume.

Cool Black's Mad Commentary: It must be said that this is JUST a pilot (first episode) order. HBO orders it, puts up the money to film it and THEN decides if they want to pay for the whole season. It's a good bet though that HBO will order a series from the pilot given the creative personnel involved.

HBO’s drama pilot Da Brick will not be going forward. The pay cable network just passed on the project, executive produced by Spike Lee, John Ridley, Doug Ellin and Mike Tyson. Written by Ridley and directed by Lee, Da Brick was inspired in part by Tyson’s youth and explored what it means to be a young, black man in supposedly post-racial America. The central character of troubled aspiring young boxer Donnie was played by newcomer John Boyega. Ellin, Ridley, Lee, Tyson and Jim Lefkowitz executive produced. The move comes on the heels of HBO also opting not to go forward with Ellin’s comedy pilot 40.

Cool Black's Mad Commentary 2: As stated above^^ in the previous commentary "HBO orders it, puts up the money to film it and THEN decides if they want to pay for the whole season." Well HBO decided NOT to pay for a whole season which I find unfortunate. I think it would have been the perfect venue for John Boyega to display his acting skills a la Idris Elba in Luther. (Read my review of Luther here)


Related Links
Read all of our posts about Da Brick here

Posted by Dankwa Brooks at 5:47 AM