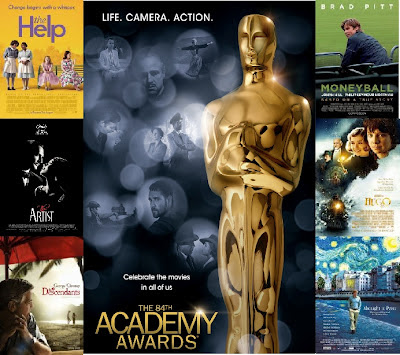 Of the nine pictures nominated for "Best Picture" I have seen six of them and they are The Descendants, The Artist, Midnight in Paris, Hugo, Moneyball and The Help (All posters from those pictures in the graphic above). My picks for the Oscars will be from those pictures. (I will also bold in red the correlating nominations.)

My pick will be under “Cool Black’s Oscar Pick:” These are NOT who I think WILL win; it’s who I think SHOULD win based on my opinion and those who know me, know I am quite discerning.

As a screenwriter two of my favorite categories are the two screenwriting ones.

Midnight in
Written by Woody Allen

A Separation
Written by Asghar Farhadi

Cool Black’s Oscar Pick: Woody Allen for Midnight in Paris. While a lot of people joke that the screenplay for The Artist is about 45 pages because it has no dialogue (average screenplay about 120 pages) it DOES have a lot of stuff going on and is totally deserving as is the hilarious Bridesmaids a really great screenplay with humor and heart, but Woody Allen wrote a truly wonderful screenplay blending fantasy, humor and real life literary legends.

Cool Black’s Oscar Pick: Steven Zaillian and Aaron Sorkin for Moneyball. Of the films I saw Moneyball and The Descendents were the only two worthy of even being considered winning an Oscar. The screenplay for The Descendents was great, but the equally great Moneyball made me care about baseball statistics and baseball trading. Both things I had no interest in.

The Girl with the Dragon Tattoo
Jeff Cronenweth

The Tree of Life
Emmanuel Lubezki

Cool Black’s Oscar Pick: Robert Richardson for Hugo. Not a real hard choice. Of the three I’ve seen from the category Hugo’s cinematography clearly stands out.

The Girl with the Dragon Tattoo
Kirk Baxter and Angus Wall

Cool Black’s Oscar Pick: Thelma Schoonmaker for Hugo. This was a really hard choice for me as I have seen all five nominated films and while all good films no editing REALLY stood out above the others, but if I had to pick it would be Schoonmaker.

Actor in a Supporting Role
Kenneth Branagh
My Week with Marilyn

Cool Black’s Oscar Pick: Nick Nolte for Warrior. Having seen only two of these five performances it clearly goes to Nolte. I really like Jonah Hill’s performance in Moneyball, but it wasn’t Oscar worthy. Nolte as usual does an excellent job in the underrated Warrior.

Actress in a Supporting Role
Bérénice Bejo
The Artist

Cool Black’s Oscar Pick: Octavia Spencer for The Help. I REALLY liked the four performances I saw and all well deserved. Melissa McCarthy’s performance was hilarious in Bridesmaids. She had me laughing out loud from her FIRST lines. Jessica Chastain was really great in The Help and Bérénice Bejo wonderful and charming in The Artist, but Octavia Spencer really surprised me in The Help HERS was my favorite performance in the film.

Actor in a Leading Role
Demián Bichir
A Better Life

Cool Black’s Oscar Pick: Jean Dujardin for The Artist. This was another hard choice for me. Of the three I saw they were all great! I joke on Twitter that I’m #TeamClooney because I’m a huge George Clooney fan for I think he is one of ’s true Leading Men meaning screen presence AND acting ability. I also really liked Brad Pitt in Moneyball. His performance MADE that picture the great film it was. While I thought Clooney was FANTASTIC and did give the performance of his career Jean Dujardin was simply BRILLIANT in The Artist. His performance without dialogue was nothing short of remarkable.

Rooney Mara
The Girl with the Dragon Tattoo

Michelle Williams
My Week with Marilyn

Cool Black’s Oscar Pick: Viola for The Help. Not a hard choice since I’ve only seen two of these performances and while I thought her performance was ok, there was nothing Oscar worthy about Rooney Mara in The Girl with the Dragon Tattoo. To be clear Viola Davis does not get my pick by default, she did a truly great job.

The Tree of Life
Terrence Malick

Cool Black’s Oscar Pick: Truly hard choice having seen four of these directors work. Martin Scorsese’s direction was one of the ONLY things I liked about Hugo, the direction in The Descendents by Alexander Payne was really good as was the direction by Michel Hazanavicius in The Artist, but my PICK has to go to Woody Allen for Midnight in Paris, a truly wonderful film.

The Tree of Life
Nominees to be determined

Cool Black’s Oscar Pick: Again a hard choice among the six of nine I’ve seen. Of those six at least five deserving of the Best Picture nomination. Since I’m sure you’re wondering which of those seven DID NOT deserve the nomination for Best Picture it is Hugo. Great cinematography and direction, but the film just was not good to me. The main character had nothing remarkable about him and the film was long and meandering.

The Help was a wonderful film. While I understand the underlying reserve about the film (from the black community I should add) THE FILM is great and deserves all of its acclaim (You can read my review here )

Moneyball was a really great film as I said above elevated by the great performance of Brad Pitt. I’m not a fan of “sports movies” or baseball like that, but this film made a great picture out of both.

Midnight in is As I stated above is a truly wonderful film. I loved the writing, the acting and the direction. Major kudos to Woody Allen for creating a classic.

The Descendents again a wonderful film. As I stated above George Clooney was FANTASTIC and gave the performance of his career. Not recognized by the Academy was the EXCELLENT Shailene Woodley as Clooney’s oldest daughter in the film. The film was indeed great and deserving of all the acclaim.

I DID NOT want to see this film. What did I want to see some black & white silent film for? Really?! But a lot of my film friends I made on the @NotherBrother Twitter raved about the film and as I like to see ANY film I said let me see what all this talk is about and as one of those friends Rebecca (@FilmFatale_NYC) of Cinema In Noir  stated something to the effect of “I was the biggest cynic walking in, but afterwards I just can’t’ stop smiling” I totally agree with that. The Artist was charming, dashing, heart tugging, funny, EXCELLENT!

My PICK for BEST PICTURE has to go to The Artist.

So that’s it, my picks this year from all the major categories. If it's one travesty this year and I always seem to have one is that Shailene Woodley was not nominated for her role in The Descendants. 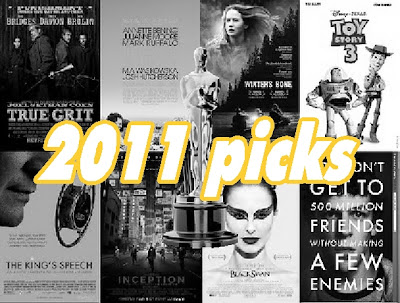 Posted by Dankwa Brooks at 1:35 PM