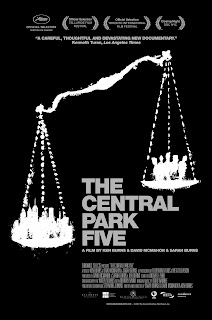 Synopsis: The Central Park Five is a 2012 documentary film about the Central Park Jogger case, where five juvenile males—four black and one Hispanic—were tried and convicted for the assault and rape of a female jogger in New York City's Central Park. The film was directed by Ken Burns, Sarah Burns, and David McMahon. It was released in the US on November 23, 2012

REVIEW by Cool Black
If you like Ken Burns’ work you’ll definitely like this. The film wasn’t as “cinematic” as I would have liked instead playing like a short version of Burns usually PBS fare (which can usually run four hours or more). As expected Burns’ use of archival footage and new “transition footage” was impeccable and in the end Central Park Five is a really great documentary that makes for compelling viewing at times.

Cool Black’s Mad Commentary: Because of new voting procedures (described in more detail at Deadline where you can also see the shortlist of eligible films here) The Central Park Five WILL NOT be in consideration for the Academy Award for Best Documentary.

“I’m truly baffled by this; Not that none of the 15 films listed below aren’t worthy (I haven’t seen them all); but I can say that of those I have seen (more about half) on this list, I think The Central Park Five most certainly belongs, and I’d say is even stronger than some of them,” write Shadow and Act’s Tambay A. Obensen.

Unlike Mr. Obenson, of the films on the shortlist I’ve only seen one, Bully, and The Central Park Five was indeed better than that. Again, I didn’t think it was that “cinematic”, but I admit I haven’t kept much of a tab on the Best Documentary category throughout the years and I assume the Academy voters know better than I.

My Review of the 2019 Limited Series based on this case, 'When They See Us' below


#WhenTheySeeUs Review: I don’t know what to say. It was excellent, but to say I “enjoyed it” is a total misnomer. This film, presented as a Four (4) Part Limited Series, was IMPACTFUL. From the moment the arrests happen you are WITH these five boys. And that’s WTF they were—BOYS! Young males of other races are “snips and snails and puppy dog tails”, but young males of color are considered more mature than they are even when even accused of a crime without proof—considered monsters. WTSU makes you FEEL what these boys are feeling. This film takes a HARD, UNFLINCHING look at what these boys and eventual men went through in the legal system and didn’t sugarcoat shit! I’ve done MY OWN research on the so-called “Central Park Five” before I even saw this and AVA DUVERNAY et al, her cast and crew NAILED their traumatic journey. And that shit WAS traumatic. For real I was like “Shit! Is anything GOOD gonna happen in this film? Damn sis! Can I breathe?” Not really and I think that was the intent. Oh you’re gonna feel this shit. As usual I gotta talk about the filmmaking. Starting with Director and Co-Writer AVA DUVERNAY, she and the other credited writers JULIAN BREECE, ROBIN SWICORD, ATTICA LOCKE and MICHAEL STARRBURY as stated, took you THERE! Cinematographer extraoidinarre BRADFORD YOUNG shot the hell out of it with lots of flair and oft times gourgeous shots. The acting, wow the acting. WOW the acting. The five young men and four older men (one played both versions) did tremendous jobs as did the actors that played their family members. I’m running out of space here, but I’ll will list them on Twitter. Suffice it to say, bravo.👏🏽👏🏽👏🏽 I binged watched all four parts in one sitting (a rarity for me) and •LIVE•TWEETED• the whole thing so a lot of the cast and crew are already mentioned. (I’ll post the thread🧵 at the Link in my BIO) Lastly, I highly recommend WHEN THEY SEE US, but ⚠️Caution⚠️ and I can’t state enough, YOU WILL FEEL. You will. Every.moment. 100%
A post shared by Dankwa Brooks (@dankwa) on Jun 1, 2019 at 9:30am PDT