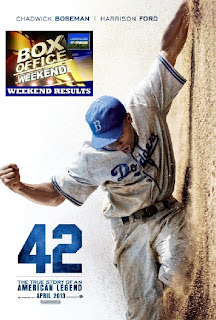 Exit polling for Legendary Pictures/Warner Bros’ 42 showed the audience composition was males 48% females 52%; under age 25 was 17%, age 25 and up 83% (with a predominantly older audience), and the main reason for attending the movie was subject matter 84%. A Warner Bros exec tells me: “While we do not poll race breakdown, I can tell you we performed extremely well in all the large urban markets. But the highest grossing theaters were the country’s most commercial screens.” Pic’s $9.1M Friday opening received an impressive +25% Saturday bump to $11.3M for what should be a greatly overperforming $27.3M weekend and #1.

The Jackie Robinson biopic 42 (3,003 theaters) nicely overperformed tracking which was in the mid-teens for an original movie about race and baseball with no hot stars. (Granted Harrison Ford is a legend but not box office nowadays.) The opening number is a record for a baseball flick in terms of straight dollars, topping the $19.5M debut of 2011′s Moneyball.

Even factoring in higher ticket prices and inflation, the $13.7M debut of 1992′s A League Of Their Own would have been on par with 42. The moderately budgeted film ($38M) received an ‘A+’ CinemaScore which will help word of mouth. Grosses on MLB’s Jackie Robinson Day – which is April 15 - when every player wears Robinson’s #42, could even stay level because of the attention. In addition to the $38M marketing spend, the film has generated a ton of national media and awareness that didn’t cost any
money. “Just watching the film’s box office growing at a rapid pace all day,” a Warner Bros exec gushed on Friday. “Great news for Thomas Tull and his team at Legendary.”

Still, I wondered whether Academy Award winning writer-director Brian Helgeland’s soft-focus storyline would turn off moviegoers to Thomas Tull‘s passion project, especially without the street cred of African-American filmmakers involved. But no. ‘All you can do is put these things together in the way you think is best,” Tull told me Thursday. Instead he relied on Rachel Robinson. ”Her voice helped us with authenticity. That was the person who lived it,” Tull said. “And that was a really important story for us to tell.” Tull
does admit that, had Rachel herself not been so involved, there may have been
more focus on the tough stuff.

The filmmakers wound up with the highest testing movie that Legendary has ever had. Rachel Robinson had been promised over the last two decades that Hollywood would make this movie – and never did. Then, at 90 years old, she was approached by Tull two years ago. ”She looked me in the eye and asked, ‘Are you going to make this movie?’ and I said we’d make it happen,’” Tull recalled. 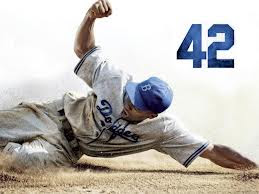 Posted by Dankwa Brooks at 2:58 PM

eToro is the ultimate forex trading platform for rookie and advanced traders.