Kanye West slams paparazzi in rant during NYC show: 'I ain't no motherf--king celebrity'
The rapper took the stage at the Roseland Ballroom to perform for the Adult Swim upfronts but treated his audience to a profanity laced filibuster on how he’s not a ‘celebrity.’

WARNING: All curse words below HAVE NOT been censored.

Kanye West made it clear no one is "gon' stop" him.

The rapper took the stage Wednesday night in New York City at the Roseland Ballroom to perform for the Adult Swim upfronts and went on a bit of a tirade to the audience.

"One thing about me, I'm the worst kinda ... celebrity because all I do is make real music. All I do is sit in the studio and make real, real shit. And that's it," he said while half-singing in a video captured by Complex Magazine.

Just last week, West found himself walking into a street sign due to the amount of photographers following him and pregnant girlfriend Kim Kardashian.

West is slated to perform on this week's “Saturday Night Live” finale and took a stab at the comedic live show.

He made it clear on stage that when asked by a friend if he was going to "do, like, a skit about the paparazzi and shit and, like humanize yourself?"

But Kanye's response was simple: "I ain't here to apologize to no motherfuckers, man. It ain't about me humanizing myself. At what point did I become unhuman where I had to turn myself back? Or maybe I was demonized. Or maybe I was treated inhumane and not human in that kind of situation," he told the crowd.

The ranting didn't stop there. He went on to say he was not a celebrity despite his own renown and the fact that the future mother of his first child is one the most photographed tabloid targets in the world. 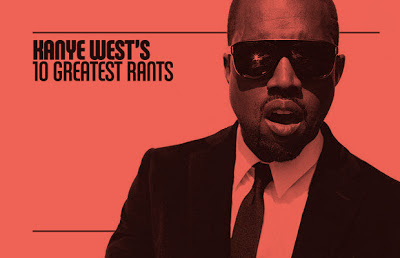 CLICK the graphic to read them
Posted by Dankwa Brooks at 1:54 PM