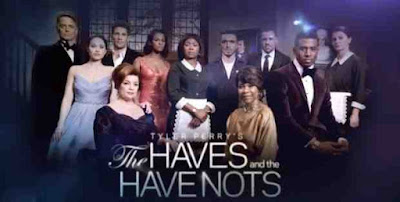 UPDATED: "The Haves and the Have Nots," the network's scripted debut, opens to 1.77 million viewers and builds in its second episode.

by Michael O'Connell, The Hollywood Reporter
May 29, 2013

Tyler Perry and Oprah Winfrey may be the perfect match -- at least in terms of Winfrey's cable network. OWN launched its first scripted effort Tuesday night, pulling in its highest rated series premiere yet.
The Haves and the Have Nots, from the prolific writer, director and producer, brought in 1.77 million viewers with its 9 p.m. premiere. Part of a back-to-back premiere, the show managed to grow to 1.8 million viewers in its second episode at 10 p.m. The strongest premiere until now has been the recent debut of Life With La Toya (1.18 million).
Among women 25-54, OWN's ad-friendly demo, the 9 p.m. episode brought in a 1.57 rating and the 10 p.m. episode pulled a 1.67 rating.
OWN and Perry inked an exclusive multiyear deal in October, which will see the multi-hyphenate develop new series and projects for the network. The pact included the addition of The Haves and the Have Nots to the network, as well as comedy Love Thy Neighbor -- which opens Wednesday.
For the second quarter to-date, the young cable network is up 12 percent in total viewers compared to last year.

Posted by Dankwa Brooks at 3:49 PM

Email ThisBlogThis!Share to TwitterShare to FacebookShare to Pinterest
Labels: OWN, Tyler Perry