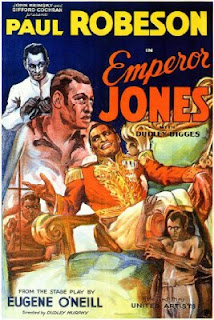 SYNOPSIS
Unscrupulously ambitious Brutus Jones escapes from jail after killing a guard
and through bluff and bravado finds himself the emperor of a Caribbean island.

Cool Black Review
I’ve always wanted to see a Paul Robeson movie and the passage below from the book Toms, Coons, Mulattoes, Mammies, and Bucks: An Interpretive History of Blacks in American Films by Donald Bogle provided the impetus.

Now as you can see the plot sounds gotdamn ridiculous. I was like wow, what a whirlwind of a plot and yes all of that happened.

The 1933 film itself is of course dated, but it had an audacious performance by Paul Robeson who of course sings several songs in the film. The acting was big and broad, but that was the style of the day. If you’re a fan of the old pictures this one was a decent one and you get a chance to see a pioneering performer. Without Robeson there would be no great African American performers of today.

A stint on the chain gang allows the film its first opportunity to show Robeson without his shirt on, an exposure of male nudity unusual for 1933 and certainly for a black actor.

I too was surprised at this. That was only the first of many opportunities Robeson bared his chest.  As explained in the Bogle book and from my lifetime of watching film, the black male is usually “neutered” on film. The black male is never as “naked” as his white counterparts, but here in the 1930s was this big, black man shirtless. Applause to all that were involved in putting this film out for I know it couldn’t have been easy.