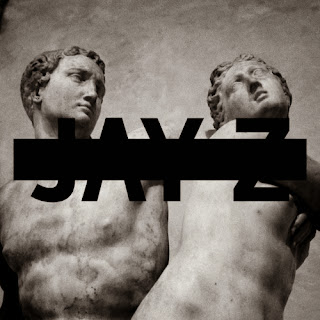 Before I start, some background.

On June 16 during the fifth game of the 2013 NBA Finals, Jay-Z was featured in a new commercial by Samsung where he announced that his twelfth studio album would be titled, Magna Carta Holy Grail and would be released on July 4, 2013. He was seen speaking to producer Rick Rubin in the studio about the album saying, "The album is about, like this duality of how do you navigate through this whole thing, through success, through failures, through all this and remain yourself." The commercial featured producers that are confirmed to be on the album including Timbaland, Swizz Beatz and Pharrell Williams. The album was available for free download on July 4, 12:01 a.m. EST, to the first one million Samsung mobile device users via an app. —Wikipedia

Watch that spot below.


I was watching that fifth game of the 2013 NBA Finals when that commercial came on and in the subsequent days when the online hype reached a fever pitch I posted the below on social media. 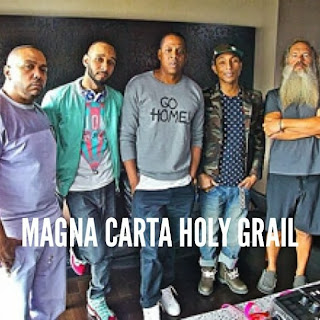 Let me tell you about this #MagnaCarta. I'm a Jay-Z fan, I bought his last Ep #LiveInBrooklyn and will probably buy this new one, no frontin, BUT let me be clear unless he was holding them for this album Hov's mic skills have fell the f*ck OFF! I can't remember the last time I heard a Hov verse and said "YOOOO that was the sh*t!" I mean the best MC on #WatchTheThrone wasn't Hov. Let's keep it real. Bringing in all these superstar producers? *Yawn*  I'm not a fan of JUST hot beats I'm a fan of wicked rhymes and effortless spitting. Give me the complete package or don't do it!  I'm still a fan, but don't expect me to fall for the okey doke because you got some other stars on the album. If that's it he needs to as his t-shirt says #GoHome.

Well it seems like hot beats may be enough because I have to admit MCHG was one of the best hip hop albums of summer 2013. As stated MCHG has some superstar producers and the beats aren’t just hot, they’re smoking hot!

From the album opening Holy Grail featuring Justin Timberlake to the old school sounding beats of Picasso Baby (both produced by Timbaland) the album don’t stop with the hot tracks.

Pharrell comes through with the bangers Oceans (featuring Frank Ocean) and BBC featuring NaS, but it is Timbaland that reigns heavy over MCHG. Timbaland worked on 7 out the 14 songs, an astounding SIX of those seven are HOT! It has to be said that Timbaland has co-credits on most of these songs, but most of them he has “chief credit”.

Among the best Timbaland songs are the best use of a Biggie sample I’ve ever heard on JAY Z Blue. The song cleverly blends samples from "My Downfall" by The Notorious B.I.G. with Jay-Z’s vocals. Timbaland also produced the R&B sounding Part II (On the Run) featuring Beyoncé that is mostly R&B, but a great “sequel” to Hov & B’s 03 Bonnie & Clyde. The other HOT tracks Timbaland worked on were the aforementioned Oceans and FuckWithMeYouKnowIGotIt.

In the end, Hov’s rhymes aren’t as innovative as they used to be, but they’re good enough to still make hot songs and in this case one of the hottest albums of the summer. I really have to say that. After giving much shade and skepticism over the way he announced the album, I think he deserves as much.

Below is what I thought were the HOT tracks.

Posted by Dankwa Brooks at 1:05 PM