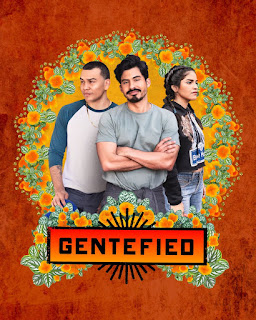 I absolutely LOVED this series!

To be clear,  I was seeing tweets and such about the series weeks before it premiered and meeting one of the Producers at the 2020 Sundance Film Festival, I was GOING TO watch it! What I did not know was how much I would love it.

THE STORY: Gentefied centers on three cousins who band together to keep their Grandfather's popular Boyle Heights [Los Angeles] taco shop in business as the neighborhood becomes more gentrified.

Throughout the show's first season the cousins confront their differences in their connections to their community, their heritage, and their commitment to the family business, all while navigating larger themes of gentrification and the marginalization of Latinx's in America.—#IMDb

That IMDb synopsis is pretty on point, what it does not point out, why I’m here🙋🏾‍♂️, is how you fall in love with this family and their various stories.

The writing is so on point as it infuses Latinx culture into a great family drama that’s not about gangs or some other negative trope that Hollywood loves to focus on, but about survival in the hood amid gentrification and other economic factors.

The performances from the multi-generational cast across the board was terrific—TERRIFIC! I’m not going to list them individually because they ALL did fantastic jobs. They performed superbly in #Spanglish and alternating between English and Spanish within the same scene and mostly within the same line of dialogue. The actors performances really made you fall in love with their characters.

Plain and simple, Congratulations to the ENTIRE Cast & Crew of 'Gentefied' Y’all made a PERFECT season of television. For la cultura👌🏾

The entire season is on Netflix right now!

Posted by Dankwa Brooks at 6:19 PM