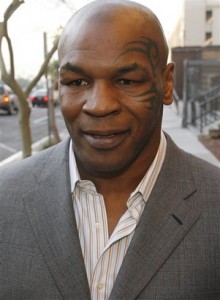 EXCLUSIVE: It looks like Da Brick is a go at HBO. I hear the pay cable network has handed out a pilot order to the drama project about a young boxer from Entourage creator Doug Ellin, filmmaker Spike Lee, former boxing champion Mike Tyson (pictured left) and writer John Ridley. Ridley wrote the script for the pilot, which will be directed by Lee. Set in current-day Newark, NJ, nicknamed “brick city,” Da Brick is described as a contemporary exploration of what it means to be a young, black man in supposedly post-racial America and is loosely inspired by aspects of Tyson’s youth. Search is under way for an young black actor to play the lead.
﻿﻿
﻿﻿Da Brick stems from Tyson’s 2010 guest appearance on Ellin’s HBO comedy Entourage, a series inspired by executive producer Mark Wahlberg’s early years in Hollywood. “That’s when Mike asked me, why don’t we do with my life what we did with Mark’s life,” Ellin told me back in June when Da Brick was still in development. “The initial idea was ‘Entourage meets The Wire,‘ an edgy story about an up-and-coming boxer and his crew that is much more dramatic than Entourage.” While it was not a series Ellin felt he would write, he and his producing partner Jim Lefkowitz decided to develop and produce it through their company.

Lefkowitz brought in writer Ridley who, in turn, brought in Lee, with whom he had been developing a movie about the L.A. riots. Ellin, Lefkowitz, Ridley, Lee and Tyson are executive producing Da Brick, with Tyson’s wife Lakiha Tyson and Azim Spicer, CEO of Las Vegas’ SpiceReel Prods., co-executive producing.