Since Kanye West first announced Watch the Throne on Twitter in August 2010, the tag-team LP with Jay-Z had been shrouded in mystery. In the months leading up to the album's August 8, 2011 release, details remained sketchy. There was no loaded press run, super radio push, music video or album leaks leading up to the drop. In fact, "H.A.M" and "Otis" were the only songs released to the general public; beyond that there was nothing.

A few were in the know, like Def Jam VP of A&R Bu Thiam who, was there throughout the recording process and helped Hov and Yeezy achieve their sonic goal. "As an A&R it's a process of trying to bring out the artist's creative ideas and their visions," Thiam told MTV News of his general job function in an exclusive interview.

However, when dealing with such accomplished artists like Kanye and Jay, who both have classic works under their belts, Thiam's role wasn't that of a traditional A&R rep. "When it comes to big artists like Jay-Z, Kanye West, Rihanna, a label can't just assign you to a project like that," he said. "You can't just be like, 'Yo Kanye we're gonna have such and such be your A&R.' He's gonna be like, 'Who the f--- is that? Hell no.' So they have to really rock with you off [general principle] and that's how the whole process goes."

And rock they did. From start to finish, Bu Thiam was there, lending his professional opinions, helping to build tracks and carry them from concept to a fully mixed and mastered product.

There aren't too many people who can break down Watch the Throne Breakdown track-by-track, but then again there aren't many people in the game like Bu Thiam. 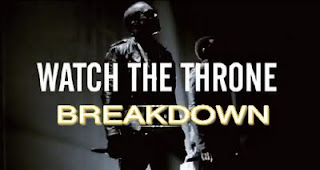 "No Church in the Wild" featuring Frank Ocean (Produced by 88 Keys, Kanye West and Mike Dean)

"Collectively [working with Frank Ocean] was both of their ideas. It was like, 'Yo this guy is incredible.' They were a fan of him prior and it was like, 'Yo we should fly him to New York to come out here.' [Frank] went in and he just went to work. That kid is incredible, man. That particular record was one take. It just was like, [sings] 'What's a king to a God.' We were actually in the room like, 'Yo he f---ing nailed it.' "

" 'Lift Off' was definitely one of the earlier records [recorded for the album]. [Putting the sound effects on the record] is a process because initially a record might just be a beat, a chorus and a hook and as [Kanye] hears things he adds and takes things out."

"Them guys, everything they rap about is what they actually go through. So when you hear that album it's real. When Jay says, 'I ball so hard motherf---ers wanna fine me,' they gave him a fine because he took a picture with the college players at the NCAA tournament. So he got a fine for that in real life. So when you hear it you think he's braggin', but no, it's really true."

"[Kanye] was late for his flight, we were in the studio working all day and he was late for his flight. As we were leaving he was like, 'Yo hold on for a second.' So he drops his bags and goes to the MPC [beat machine] and his assistant is rushing him and he's just f----ing with [the beat]. What's so crazy is the whole time he's doing that Jay is writing his verses in his head. But Jay is watching the [NBA] playoffs, I think it was the championship; Miami and Dallas. So Jay is watching the playoffs. I'm not even thinking Jay is paying attention to what 'Ye is doing and by the time he is finished it's like 'I invented swag ...' And I'm like, 'What the f--- just happened?' "

"Gotta Have It" (Produced by The Neptunes and Kanye West)

"We were at the Mercer [Hotel in New York] and Pharrell came by, Swizz came by, Rihanna came by it was like a room full of superstars. Swizz came through with [shoe designer] Christian Louboutin — the guy! It was really that guy."

"Verse Simmonds actually did the chorus for 'Who Gon Stop Me.' Initially if you hear the second half of that [finished] beat." The [entire] song was [originally just] the second half. The dub step factor came later on in the process. I gotta give [Kanye] all credit for that, when he came back from Paris he was like, 'Yo I added this piece to the beat.' "

"Murder to Excellence" (Produced by Swizz Beatz and S1)

"As much as people may think that Jay talks about money and cars, he's really not that guy. Of course he has it, but his whole mission is to build. He wants to have others join him, he's trying to build black excellence, like the black youth as the next [generation of] executives."

"That's what Frank is about if you listen to his music you can tell that he's a very smart guy. We were in the studio, Jay wasn't there, 'Ye wasn't there, it was just me and Noah — one of the engineers. [Frank Ocean] was just thinking of different concepts, he was there for like eight hours, then probably like six in the morning he was like 'Sweet baby Jesus.' "

"There is only so much you can do for a person. Like Jay said [in the song], 'I tried to teach n---as to be kings and all they wanted to be was soldiers.' Like that's a real line, that's how he felt. [Kanye and Jay] do get a lot of criticism in their careers and how they move and I think they just wanted to express it."

Posted by Dankwa Brooks at 7:29 AM