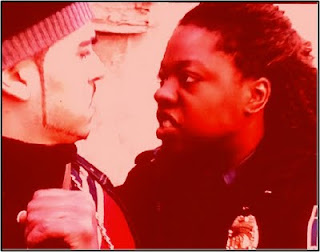 I never even knew she was on the show until I read the below on the website Shadow & Act.

The below was posted by one of the writers, Sergio

With all this discussion we’ve had lately regarding Viola Davis and her role in the upcoming film The Help, and whether it’s a degrading stereotyped role beneath her considerable talents, it reminded me of a role she played some ten years ago which might be even more controversial.

I’m referring to her performance as a vicious killer on one of the better and strongest episodes of Law & Order: Criminal Intent, during the show’s first season.

In that CI episode entitled Badge, Davis played an ex-NYC cop, Terry Randolph, drawing a pension, but who was also working as a security guard for the city’s public school system. That means that Randolph was “double dipping” getting paid twice by the city which is a violation of city’s rules. If caught, she would be subject to heavy fines, the loss of her pension, her job, or both.

And just to prove she was a really rotten, despicable person, she’s also shaking down or accepting bribes from drug dealers to let them sell drugs on school property. But when a NYC comptroller comes snooping around, investigating Randolph’s and other cops’ illegal activities, she breaks into his home and kills him, his wife and their two young children.

Using her previous experience in forensics as a cop, she arranges the evidence to make it look as if the comptroller killed himself and his family in a murder/suicide, in an act of rage. However clues and mistakes by Randolph lead the police to target her as the murder suspect and eventually she’s arrested after she reveals herself as the murderer in a trap set by the police.

Needless to say Davis is terrific in the role, and convincingly chilling as a sociopathic serial killer, without any trace of remorse or guilt, only revealing desperation and fear when she’s finally arrested for her crimes.

But even when I saw the show for the first time, and I’ve seen it few times since then, I was always struck by the fact that here was a black woman playing the part of a depraved serial killer of a white family. And considering how sensitive we are to black actors playing, what could be called “negative” roles (Hell Halle [Berry] is still getting grief for Monster’s Ball) I wondered how Davis felt about playing that part.

Fortunately I had an opportunity to ask her a few years ago when I interviewed her while she was on a media tour hyping the film Doubt. I asked her if she had any second thoughts or trepidations doing that role on L&O:CI, especially as a black woman, and she told me that she didn’t have any at all.

In fact, she told me, the fact that she is a black actress was the reason why she wanted to do it. As she explained, first of all, when was the last time had anyone seen a black woman play a serial killer? She felt it was an unique part, and that any actor or actress, especially a black one, should be free to take risks and challenge themselves, even if it meant playing a horrible person. How else who could one get better at their craft? Being an actor that means one should always take risks and challenge themselves.

I first really noticed Viola Davis on the short lived series Traveler. Traveler was a short-lived television series that ran from May 10, 2007 until July 18, 2007 on ABC where she played one of the two FBI agents on the trail of the main characters on the show.

When I saw all the media attention she was getting from the film Doubt (2008), I thought I recognized her from something as I remember all the good black actors I see. As a fan of hers from Traveler and seeing her excellent performance in Doubt, I wanted to see her performance on Law & Order: Criminal Intent. I finally did (Thank You Netflix) and I agree with everything Sergio wrote above. I also agree with Ms. Davis herself that “it was an unique part, and that any actor or actress, especially a black one, should be free to take risks and challenge themselves, even if it meant playing a horrible person.”.

I get tired of seeing black actors playing the same ole roles over and over again. They are always the token black friend, the criminal, the sage or the Magic Negro. (See what I mean by that term here ) so to see a black actor play a different part was appealing. Getting to see an actor, whose work I respect is doubly appealing hence the reason I sought out this episode.

Because there were apparently no clips or pics from the episode on the Internet, I took some of the episode with my cell phone camera which you can see in the slideshow below.

More information about the episode.

An apparent murder-suicide by an auditor at the city's comptroller office takes a turn when an audit of the school district's security system is found.

More links about the episode at:

Posted by Dankwa Brooks at 4:00 AM