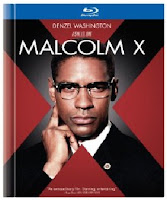 The motto being “if at first you don’t succeed try again”... As you may recall, Spike Lee’s Malcolm X was scheduled to come out earlier this year in January 2011 on blu-ray DVD, but was suddenly pulled out from the its announced release date because of a music rights clearance problem.

Now, finally it looks as if those issues have been dealt with now that it has been announced the film will make its belated blu-ray DVD release on Jan 31, 2012 on Warner Home Video. Extras on the BD disc will include audio commentary by Lee, cinematographer Ernest Dickerson, editor Barry Alexander Brown and costume designer Ruth Carter.

Other extras will include deleted scenes with an introduction by Lee, the By Any Means Necessary: The Making of Malcolm X featurette and the trailer. The 2 DVD set will also include a bonus disc containing the 1972 feature-length documentary Malcolm X.

Cool Black's Mad Commentary: I’ll probably get the Blu-Ray eventually, but I already own the Malcolm X (Two-Disc Special Edition, pictured right) and these extras sound like what I already have on that edition. :(