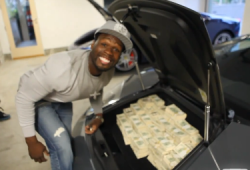 Report: 50 Cent Hauls In $8.7 Million Via Twitter Over the Weekend


50 Cent made a lot sense, financially, on Twitter over the weekend. According to the New York Post, the rapper saw the value of his 30 million shares in a penny-stock company increase by $8.7 million after sending out a series of tweets urging his 3.8 million followers to invest, which sent the price of the stock skyrocketing (relatively speaking).

The penny-stock company also owns TV Goods, a small marketing company ran by former 'Shark Tank' star Kevin Harrington. The Post even goes as far to call H&H a "money-losing venture," but once 50 Cent started telling his Twitter followers to invest, the company's stock rose from 10 cents to 39 cents.

The stock opened at 41 cents on Tuesday, reports The Huffington Post.

50 Cent "received 30 million shares of H&H in a private placement last October, including a series of warrants granting him the opportunity to cash in as the stock rises: at 15 cents, 25 cents or -- no kidding -- 50 cents," according to the New York Post.

One of the catches is that the company is selling the star's trademarked sunglasses, Sleek by 50, ensuring 50 Cent equity in the company. He also used the marketing of his sunglasses to sell the stock to his followers, according to StreetInsider.com.

"HNHI is the stock symbol for TVG, Sleek by 50 is one of the 15 products this year. If you get in technically I work for you. BIG MONEY," 50 Cent tweeted, according to screen shots on mediabistro, but later removed from his page.

Along with this and a flurry of other promotional tweets, 50 finally decided to back off toward the end of the weekend.

"Ok ok ok my friends just told me stop tweeting about HNHI so we can get all the money. Hahaha check it out its the real deal," 50 Cent reportedly tweeted.

Despite all of 50 Cent's recent success, the Post suggests H&H's long-term future doesn't look like a healthy investment since it currently sits at $3.3 million in debt and lost $1.3 million in the last quarter. 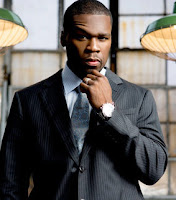 Cool Black's Mad Commentary: Say what you will about 50, but he seems to be an astute businessman. Concurrently, I refused thus far to jump on the Twitter bandwagon...maybe it's time to rethink that decision. @CoolBlackTrying2MakeThatDough?

Email ThisBlogThis!Share to TwitterShare to FacebookShare to Pinterest
Labels: 50 Cent