Spike Lee Defends Himself Against Criticism-Again 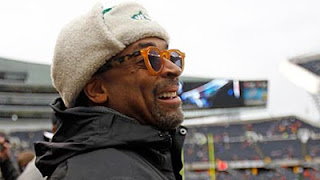 Filmmaker defends himself against criticism from Italian-American groups

In a speech Tuesday at a college in Naperville, filmmaker Spike Lee (pictured above left) said the criticism of his visit by two local Italian-American groups is a clear example of a double standard.

"They said my films portrayed stereotypical images of Italian-Americans," Lee said. "But this is the oldest trick in the world. When the subject matter (of a film) is racism, they accuse you of that. They belittle your work. If one of my films deals with race — 'Oh, he's racist!'"

During his speech, Lee read racist quotations from movies made by Italian-American directors, such as "The Godfather," "Goodfellas" and "Casino" — many which used the N-word. These films, Lee said, portrayed stereotypes or used racial slurs against African-Americans.

"In no way am I saying these directors are racist," Lee said, referring to a group that includes Martin Scorsese and Francis Ford Coppola. "All of these are great films — except for one or two. And for the most part, these scenes describe actions between Italian-Americans and African-Americans, and they're not considered stereotypical images. Why the disconnect?"

Lee asked why it was acceptable for these Italian-American directors to have their characters portray race and racism in America while he is criticized for doing so.

"Why do we have two different set of standards?" Lee asked. "Why is the football field 100 yards for them, and we have to do 150?"

Lee had one more piece of advice for his Italian-American critics.

"Those guys need to protest 'Jersey Shore,'" he said, referring to the hit reality show on MTV that shows a group of young Italian-Americans partying and generally acting up. "That's what they need to do."

Posted by Dankwa Brooks at 7:33 PM