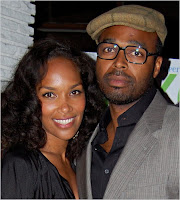 The deal with Akil Productions calls for the husband and wife team to continue their current roles as executive producers for BET's hit comedy series, as well as to develop and unspecified number of new shows for BET Networks.

The Game is the most watched series in BET's history, averaging 4.6 million viewers during its freshman run on the network earlier this year.

"We're thrilled to build on the very important relationship between our network and the Hollywood creative community, especially with two proven powerhouses in entertainment - Salim and Mara Brock Akil," said Loretha Jones, President of Original Programming at BET Networks in a statement. "Through this partnership we hope to continue to bring our audience high quality content that reflects their lives and our communities."

Social Media Has Got 'Game'

Email ThisBlogThis!Share to TwitterShare to FacebookShare to Pinterest
Labels: BET, The Game