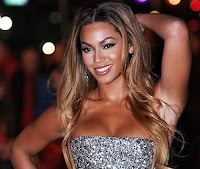 (LONDON) Beyoncé (pictured left) is rumoured to be desperate for the lead role in a remake of '90s hit musical Sister Act.

A stage version of the film, which starred Whoopi Goldberg as sexy lounge singer-turned-nun Deloris Van Cartier, is currently showing in London's West End and is soon to hit Broadway.

According to The Daily Mail, the 'Single Ladies' singer has been begging Disney bosses to give her the part. She allegedly became interested in the role after watching the show in London during her recent UK tour.

There are also rumours that the part of the Mother Superior, previously played by Maggie Smith, will be offered to Mamma Mia! actress Meryl Streep.

Cool Black's Mad Commentary: This will probably NOT be a remake so much as it is a film version of the musical. The original was a "movie with music" and this would be more like Grease, Hairspray and of course Dreamgirls.
Posted by Dankwa Brooks at 7:00 AM