A Nightmare on Elm Street-remake 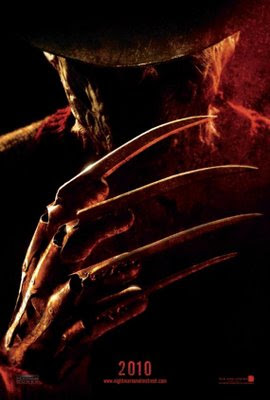 Warner Bros. just debuted the trailer for the upcoming re-imagining of A Nightmare on Elm Street, including a full look at Jackie Earle Haley in the Freddy Krueger makeup.

The trailer starts with Freddy (still alive) being chased down a dark street by the mob that winds up killing him. He's shouting that he's innocent, but the mob corners him and burns him alive. As the flames come around him, he tears off his jacket, revealing the iconic sweater.

We hear the "One, two, Freddy's coming for you" song being sung by children and flashes of kids all around a graveyard. One little girl has the claws slashed across her dress.

There's a girl in her room, reaching for something on a shelf and suddenly's Freddy's head is there, staring at her from behind. A number of kids are shown, obviously under the effect of Freddy's dream powers. One seems to be having a seizure on a rooftop and another is trying to burn herself with a car cigarette lighter.

There's a basement, filled with pipes and Freddy moving through the darkness, getting closer and closer to the camera between flashes of victims before the logo comes up.

Cool Black's Mad Commentary: I'm a big fan of the previous 'Nightmare' and 'Friday' series. Jason was cool, but Freddy was the man. Mostly because of his smartass mouth. I know people who know me are SHOCKED I'm a fan of a smartass :p.

While the Friday the 13th remake SUCKED, and these same filmmakers are remaking this as well, I'm still looking forward to what they do with it.
Posted by Dankwa Brooks at 3:48 PM