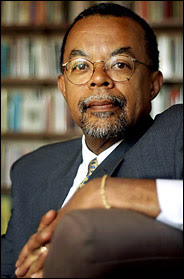 CAMBRIDGE, Mass. — Colleagues of Henry Louis Gates Jr. (pictured left), Harvard’s most prominent scholar of African-American history, are accusing the police here of racism after he was arrested at his home last week by an officer investigating a report of a robbery in progress.

Professor Gates, who has taught at Harvard for nearly two decades, arrived home on Thursday from a trip to China to find his front door jammed, said Charles J. Ogletree, a law professor at Harvard who is representing him.

He forced the door open with the help of his cab driver, Professor Ogletree said, and had been inside for a few minutes when Sgt. James Crowley of the Cambridge Police Department appeared at his door and asked him to step outside.

Professor Gates, 58, refused to do so, Professor Ogletree said. From that point, the account of the professor and the police began to differ.

According to his lawyer, Professor Gates told the sergeant that he lived there and showed his Massachusetts driver’s license and his Harvard identification card, but Sergeant Crowley still did not seem to believe that Professor Gates lived in the home, a few blocks from Harvard Square. At that point, his lawyer said, Professor Gates grew frustrated and asked for the officer’s name and badge number.

According to the police report, Professor Gates initially refused to show identification.

In the report, Sergeant Crowley said a white female caller had notified the police around 12:45 p.m. of seeing two black men on the porch of the home, at 17 Ware Street. The caller, who met the police at the house, was suspicious after seeing one of the men “wedging his shoulder into the door as if he was trying to force entry,” according to the report.

A spokesman for the Police Department did not return a call seeking comment. But in the report, Sergeant Crowley said that as he told Professor Gates he was investigating a possible break-in, Professor Gates exclaimed, “Why, because I’m a black man in America?” and accused the sergeant of racism.

“While I was led to believe that Gates was lawfully in the residence,” Sergeant Crowley wrote in the report, “I was quite surprised and confused with the behavior he exhibited toward me.”

Professor Gates followed him outside, the report said, and yelled at him despite the sergeant’s warning “that he was becoming disorderly.” Sergeant Crowley then arrested and handcuffed him. Professor Gates was held at police headquarters for hours before being released on his recognizance.

“He is cooperating now with the city to resolve this matter as soon as possible,” Professor Ogletree said, adding that Professor Gates wanted the charges against him dismissed.

Professor Ogletree said that Professor Gates had “never touched” Sergeant Crowley, but did “express his frustration at being subjected to the threat of arrest in his own home.”

He would not say whether Professor Gates believed he had been the victim of racial profiling. But Dr. S. Allen Counter, a black professor at Harvard Medical School, said he and a number of his university colleagues were “deeply disturbed about the actions of the Cambridge police.”

“My colleagues and I have asked the question of whether this kind of egregious act would have happened had Professor Gates been a white professor,” said Dr. Counter, who said he had talked to Professor Gates since the arrest. “We think that it has to be investigated, and we are deeply saddened by what happened.”