It was reportedly a chaotic scene inside the bedroom of Michael Jackson on June 25 -- clothes strewn around the stifling hot room, handwritten notes papering the walls.

The King of Pop, for all intents and purposes, was dead -- killed, ABC News has learned, by a lethal cocktail of prescription drugs that included OxyContin and Demerol. 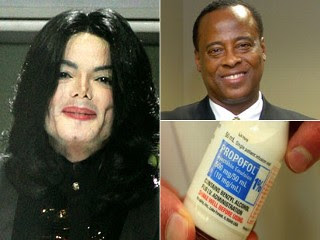 But according to The Associated Press, investigators believe it was Dr. Conrad Murray (pictured left top) who injected the pop icon around midnight with propofol, the powerful anesthetic authorities believe ultimately killed him.

Murray, whose Houston office was raided by local and federal authorities last week, has already been named in court papers as the subject of a manslaughter investigation.

Toxicology reports are due to be released this week, and it seems the net is tightening on Murray, who remains secluded in his Las Vegas home.

"Everyone needs to take a breath and wait for these long-delayed toxicology results," Murray's lawyer, Ed Chernoff, said in a statement released Monday night. "Things tend to shake out when all the facts are made known, and I'm sure that will happen here as well."

But Chernoff has already admitted that Murray didn't call 911 for 30 minutes after he found Jackson unresponsive. And the doctor, who had been hired to monitor Jackson for his planned "This Is It" tour, initially performed CPR while Jackson was lying on a bed, not on a hard surface as is proper protocol.

Black told "Good Morning America" that if Murray is charged it will be up to his defense to prove there was a sound medical reason why he prescribed and administered the off-label use of a drug that is meant for use in the operating room.

"They're going to say there's not legitimate reason to prescribe this drug for use in the home," he said. "It certainly should not be used for insomnia."

An official close to the investigation told The Associated Press that Jackson relied on propofol like an alarm clock, instructing doctors to stop the IV when he wanted to wake up. It's a drug authorities believe he may have been using for two years.

Was Anyone Monitoring Jackson's Vital Signs?

Murray's lawyers have maintained for weeks that the doctor was simply a witness in Jackson's death and had nothing to do with it.

Chernoff has repeatedly said the doctor did not administer any drug that should have killed Jackson. While he has specifically denied prescribing OxyContin and Demerol, he has not made the same assurances about propofol.

Black said that, as Jackson's physician, Murray should have know what other drugs the entertainer was taking and how they could have interacted.

As for the propofol itself, Black said, Murray is "going to have a very tough time proving you can do this at home."

It's unclear if Murray or anyone else was monitoring Jackson's vital signs while he was hooked up to the IV.

On June 29, five days after Jackson's death, Chernoff told ABC News that it was "sometime before noon" when Murray went to check on his patient.

"He noticed that he wasn't breathing, and he went over to him, felt his body, his body was warm, he checked for a pulse, he found one, a very weak pulse and he immediately started applying CPR," Chernoff said then.

TMZ has reported that paramedics found Jackson dead upon arrival with an IV in his arm and three oxygen tanks nearby, yet Murray insisted Jackson be transported to the hospital where he continued to try to revive him even after other doctors had given up.

Cherilyn Lee, a registered nurse and nutritionist who worked for Jackson, said the singer begged her to give him propofol in the days before his death. She refused to help him obtain it.

Lee told ABC News the pop star had often complained of not being able to sleep more than a few hours at a time.

"The problem with you telling me you want to be knocked out," Lee said she told him, is "you might not wake up the next morning. You don't want that."

When investigators searched Murray's Texas office earlier this month, among the items seized were a vial containing 27 tablets of the weight loss drug phentermine, a vial containing a tablet of the muscle relaxant clonazepam, a photocopy picture of Murray, Rolodex cards, public storage receipts, and a receipt for a "Cricket" phone, according to the search warrant.

Other items seized from his storage unit, according to the court records, included two computer hard drives and a "Texas Department of Public Safety controlled substance registration." Authorities also obtained a suspension notice from a Houston hospital.

The search warrants specifically directed officers to "seize and examine all items, including but not limited to, billing records, medication orders, transport receipts, billing receipts, medical records and computerized medical records, for implements and instruments used in the commission of a crime."

The warrants told police they were "commanded to search ... for property or items constituting evidence of the offense of manslaughter that tend to show that Dr. Conrad Murray committed the said criminal offense" and ship any evidence found to officials in California.

In the aftermath of his death, Jackson's addiction to a variety of drugs was revealed, including propofol (trade name Diprivan), the analgesic Demerol and the painkiller OxyContin. Track marks found on his arms support the theory that he was addicted to propofol.

Prescription medications found inside Jackson 's $100,000 per month rental home included ones in his name and ones in other names, including ones that appeared to investigators to be aliases. The medications had been prescribed by multiple doctors.

Methadone, Fentanyl, Percocet, Dilaudid and Vicodin were among the 20 drugs also found in Jackson's rental home.

Medical experts contacted by the ABC News medical unit said that the amount of medications reportedly found in Jackson's rented home was "jaw-dropping" and "amazing."

"That list is enough to put down a swarm of zombies," said Richard Bradley, chief of the Division of EMS and Disaster Medicine at the University of Texas Health Science Center at Houston.

"The list ... would be typical for an anesthesia cart in an operating room or what you might find in a recovery room, ICU, ED, etc. Definitely not what you'd expect to find in a home," said Joseph Ornato, chair of the department of medicine at Virginia Commonwealth University.

Murray is not the only doctor who has been eyed by law enforcement in the wake of the pop star's death. Law enforcement sources confirmed to ABC News earlier this month that a small group of doctors who treated Jackson before his death are being questioned as to their involvement with Jackson's alleged drug use.