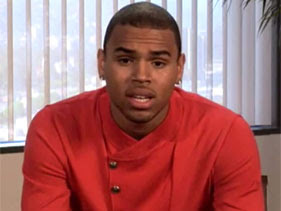 'I'm truly, truly sorry that I wasn't able to handle the situation both differently and better,' he says in clip.

In a video that appeared online late Monday afternoon (July 20), Chris Brown has apologized publicly for the first time about the domestic altercation that took place between him and Rihanna earlier this year.

In the clip, obtained by MTV News, Brown, dressed in a red long-sleeve shirt with buttons on the front (pictured above left), spoke directly to the camera and apologized to his former girlfriend and his fans.

At the beginning of the two-minute clip, Brown explains that his attorneys advised him to not speak about the situation until the legal ramifications were settled. But Brown said that ever since the February incident, he's wanted to speak about the matter. The singer expressed his "deepest regret" over the fight and said he "accepts full responsibility" for the incident.

According to the police report, on the eve of the 2009 Grammy Awards, Brown and Rihanna engaged in an altercation that left the "Umbrella" star with facial contusions. Just last month, Brown pleaded guilty to one count of felony assault. The singer will attend anger-management courses, seek therapy and perform community labor as a result of his plea deal.

Toward the end of the apology, Brown continues to express remorse. The singer said up until the incident, he was living his life in a way that would make those around him proud. Through soul searching, he said, and help from his minister and mother, Brown intends to work on himself and gain forgiveness for his actions.
"I only can pray that you forgive me, please," he said to his fans.

You can see the video below. (You may have to sit through a 30 second commercial first)

Cool Black's Mad Commentary: I still find it hard to listen to Chris Brown's music. I bought BOTH of his previous albums and probably would have bought the third, but what he did was "straight crazy" and unexcusable. I don't know if I could ever really buy his music again. I hope he never do this to anyone again.
You can read other comments at the bottom of the MTV article here