Michael Jackson: A Requiem For a King 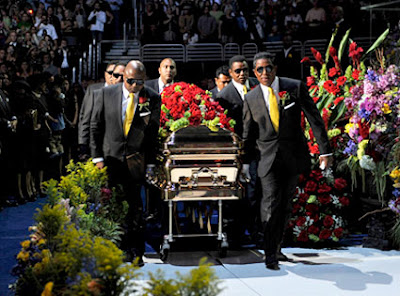 In the end, they brought Michael Jackson to the one place where his life always made sense -- beneath a spotlight and in front of his adoring fans. The superstar, in a gleaming gold coffin, was celebrated in a Staples Center memorial service that was beamed around the world and, like the icon himself, strove mightily to be all things to all people.

With family, celebrity peers, politicians, preachers and even professional athletes taking turns at the microphone, the polished but emotional service was meant both as a farewell and as a deeply sympathetic framing of the star's complicated legacy.

The Rev. Al Sharpton brought the crowd to its feet by drawing a direct cultural line between Jackson's incandescent 1980s pop success and the 2008 election of President Obama. "Those young kids," Sharpton said of Jackson's massive crossover audience, "grew up from being teenage comfortable fans of Michael to being 40 years old and being comfortable to vote for a person of color to be the president of the United States of America." Rep. Sheila Jackson Lee (D-Texas) praised Jackson as "a uniquely American hero," and music veteran Smokey Robinson judged him to be, simply, "the greatest performer of all time."

Sharpton and several other speakers alluded to media persecution of Jackson, who died June 25 at age 50, but one speaker who had known Jackson for more than four decades suggested that the reality is not that tidy.

"Sure there were some sad times and maybe some questionable decisions on his part, but Michael Jackson accomplished everything he ever dreamed of," said Berry Gordy, the Motown Records mogul who signed Jackson to his first record deal after an audition in the summer of 1968.

There were many memorable images, but for the years to come the signature moment may have been the public debut of sorts of Jackson's 11-year-old daughter, Paris Michael Katherine Jackson. Protected and, literally, veiled for much of her life, the youngster said through tears:

The ceremony was by turns somber, evangelical, thunderous and hushed. There was humor, as well. Former Los Angeles Lakers star Magic Johnson recounted how his nervous first visit to Jackson's mansion ended with the pair sitting on the floor and feasting on Kentucky Fried Chicken; Brooke Shields, who was an especially moving speaker, told how she used to tease Jackson about his most famous fashion choice.

"I'd tease him about the glove," Shields said, referring to the solitary silver glove that became Jackson's trademark. " 'What's up with the glove?' and 'If you're gonna hold my hand, it better be the non-gloved one because the sequins hurt.' "

Audience members danced along with some musical performances and stifled tears at some of the many tributes to the singer. There were also shouts from the audience of "Power to the people," "Long live the king," and "We miss you, Michael!"

The memorial, a mix of measured grief and show-biz spectacle, was seen across the globe on television and computer screens and covered with the intensity of an election night and the overkill of a Super Bowl Sunday.

Forty-seven theaters in 24 states showed the event live. As a local event, it was a surprisingly smooth affair; there was a 30-minute delay to the scheduled start time, but the predicted crush of crowds outside the arena never materialized, which Los Angeles Police Chief William J. Bratton credited to "a steady drumbeat of media coverage in recent days" telling fans without tickets they wouldn't be permitted near the downtown venue.

Excluding invited guests, the estimated 17,500 attendees were selected from about 1.6 million who sought entry.

The event was produced by Ken Ehrlich, the longtime producer of the Grammy Awards telecast. Other key figures included Tim Leiweke, president and chief executive of AEG, and, somewhat surprisingly, Bratton, who was a presence just off stage throughout the service. He also worked the press line before the event (which, to underscore the circus atmosphere, required stepping over manure left in the wake of his mounted officers) and personally guarded the gilded casket as it arrived at the arena's underground garage.

The event that seemed so smooth and precise to television viewers was more chaotic up close. Ehrlich made a number of major decisions on the fly, such as asking Robinson to open the service by reading letters from Diana Ross and Nelson Mandela. "I think this might work," Ehrlich said, rushing to hand the letters to the surprised singer, who then calmly climbed the steps to the stage, looked into the camera and greeted the world. Ehrlich also had the lighting changed for the entire arena a few minutes into the show. "It's way too hot in here," he told his lighting crew, using a shorthand expression for glare.

Jackson's casket was taken from Forest Lawn Hollywood Hills in a motorcade of ebony Rolls-Royces and SUVs on freeways cleared by police. It then was carried into the Staples spotlight by his brothers -- Jackie, Tito, Jermaine, Marlon and Randy -- who each wore a solitary sequined glove. Janet Jackson, the second most famous member of the family, left her seat and reached toward the procession, but instead of touching the casket she reached for her living brothers, giving each of them a reassuring grip on the arm.

Janet Jackson did not perform as many had expected, but Jermaine Jackson did with a rendition of a "Smile," the bittersweet song of encouragement composed by Charlie Chaplin for his 1936 film "Modern Times." It was Michael Jackson's favorite song, the crowd was told, and the emotion-choked performance by his older brother added to the poignancy of the lyrics, written by John Turner and Geoffrey Parsons more than 70 years ago:

Smile tho' your heart is aching
Smile even tho' it's breaking
When there are clouds in the sky
You'll get by, if you smile

Other performances included Mariah Carey and Trey Lorenz performing "I'll Be There," the Jackson 5 classic that was also a key hit for Carey in 1992, and Stevie Wonder -- a performer who could certainly understand Jackson's struggle to handle a show-biz childhood -- giving an emotion-charged revival of his own 1971 composition "Never Dreamed You'd Leave in Summer."

Some performers sang to the audience, others to the casket. Some of the producers were reluctant at first to have the casket present, especially considering the Forest Lawn ceremony before the Staples event and logistics of moving the body across town.

Ehrlich said the pacing of the service mirrored black church services: Uplifting musical numbers followed by fiery, emotional speeches followed by brief pauses. "People had time to think about what they had heard before we went on to the next order of business," he said.

Viewers also studied the service for hidden meanings. Would long-estranged sister La Toya sit with her family? She did. Would the singer's two former wives, Lisa Marie Presley (daughter of Elvis) and Debbie Rowe (mother of Jackson's two eldest children) attend? They did not.

Two other key figures in Jackson's life saga, actress Elizabeth Taylor and singer Diana Ross, also did not attend. Both released statements saying they were not ready to grieve in public.

The next order of business for organizers is figuring out who will pay the bill. Leiweke blasted L.A. City Councilman Dennis Zine for publicly demanding on Monday that AEG and the family shoulder the costs. The issue is the estimated cost of police and emergency services (as much as $3.8 million) for the event, but Leiweke framed it as more than a civic matter.

"There should be a thing called common decency," Leiweke said. "This could have waited until after the family was through the memorial. It shows no class at all. Beware the man who shouts while standing on another man's casket."

The more enduring struggle, though, is over the legacy of Jackson, a man who rivaled Elvis Presley in fame but also was marked in his last years by his indictment and acquittal on child molestation charges and sometimes cruel commentary on his ever-changing visage.

The producers and participants at the memorial offered their version of that legacy: An essential pop-culture figure, agent of cultural change and beloved humanitarian.

"He was driven by his hunger to learn," Gordy said. "To confidently top himself, to be the best, the consummate student. He studied the greats and became greater. He raised the bar and then broke the bar."