NEW YORK--(Business Wire)--
On this weekend`s special edition of Our World With Black Enterprise,
award-winning director Spike Lee sits down for an interview with host Ed Gordon
for a no holds barred interview rife with the artist`s trademark frankness.
Taped live at the 14th annual Black Enterprise Entrepreneurs Conference, Lee
takes no prisoners, tackling being labeled controversial, discussing his concern
about the image of blacks in the media, and weighing in with his thoughts on
contemporaries John Singleton and Tyler Perry.

Our World with Black Enterprise will air its exclusive interview with Spike Lee
on Saturday, May 30, and Sunday, May 31 on syndicated stations across the
country. Highlights include:

On his films being labeled "controversial":

I think journalists are lazy-how do you define people with one word? The subject
matters we`ve done in my films-I don`t think they are controversial. I don`t
think racism is controversial, it`s thought provoking. If you look at how we
dealt with that in Do The Right Thing, Jungle Fever, Malcolm X [etc.]. I don`t
think School Daze was controversial. We looked at what I feel are the
superficial differences that keep us from being a more unified
people.Superficial differences based on skin complexion, hair texture,
class-that type of stuff. That`s not controversial.

On his films becoming a part of people`s lives:

It`s great.Many people have told me over the years that they ended up going to a
historically black college because of School Daze and they never listened to
jazz before Mo` Better Blues or Do The Right Thing. Barack took Michelle to see
Do The Right Thing. That was their first date, so it`s good to hear that sort of
thing ... that`s President Barack and the First Lady, Michelle (laughter).

On the difficulty he has funding movies:

I still think that with material that is deeply rooted in African American
history, it`s harder to get that stuff made. I have a trilogy of black biopics
that I have yet to get funded-Jackie Robinson, another one on Joe Louis, then
most recently James Brown-I want Wesley Snipes to play James Brown. We just
can`t get the financing for them. So we just have to be more creative and try
and get the money. Even with the last film, Miracle at St. Anna-the bulk of that
money came from Europe.

On the era of Blaxploitation movies:

I understood that a lot of actors were getting work, I understood that a lot of
people were getting experience behind the camera. But I don`t know why we were
glorifying drug dealers. It`s the same thing with this gangta rap-you know, the
glorification of "thuggery" and gangsters. ... These hip-hop guys boast how many
times they have seen Scarface.It`s crazy. It is really leading to our demise.

On stereotypical images of blacks in the media:

Each artist should be allowed to pursue their artistic endeavors but I still
think there is a lot of stuff out today that is "coonery" and buffoonery. I know
it`s making a lot of money and breaking records, but we can do better. ... I am
a huge basketball fan, and when I watch the games on TNT, I see these two ads
for these two shows (Tyler Perry`s Meet the Browns and House of Payne) and I am
scratching my head. ... We got a black President and we going back to Mantan
Moreland and Sleep `n` Eat?

On Tyler Perry and what the black consumer (really) wants to see:

We`ve had this discussion back and forth. When John Singleton [made Boyz in the
Hood], people came out to see it. But when he did Rosewood, nobody showed up. So
a lot of this is on us! You vote with your pocketbook, your wallet.You vote with
your time sitting in front of the idiot box, and [Tyler Perry] has a huge
audience.We shouldn`t think that Tyler Perry is going to make the same film that
I am going to make, or that John Singleton or my cousin Malcolm Lee [would
make]. As African Americans, we`re not one monolithic group so there is room for
all of that.But at the same time, for me, the imaging is troubling and it
harkens back to Amos n` Andy.

On the election of a black President:

It was witnessing history.It was like being alive when Jackie Robinson
integrated baseball, when Joe Louis knocked out (Max) Schmeling-it was like
that. When Jackie Robinson played for the Dodgers, every African American in
this country was praying for him. When Joe Louis fought and won, black
communities-in Detroit, Harlem, Chicago-black communities from all over the
world would come out of the house after listening to Joe knock out those guys on
the radio ... and celebrate.With [President Obama`s victory] it was the same
thing!

On what black America must do after the Obama victory:

Now that Barack Hussein Obama has become the 44th president of the United
States, [some people want to act] like we`ve been delivered, like there is no
more racism, no more prejudice. That`s not the case at all.So we have to stay
vigilant. We live in a time where some young black men say they`re okay with the
fact that they might not live past 18 years old. Any time that young black men
think like that, you know something is wrong. We`re killing each other. It`s
genocide and a lot of it is fueled by many factors. But we have to stop it if we
are going to survive as a people.

Our World with Black Enterprise will air its exclusive interview with Spike Lee
on Saturday, May 30, and Sunday, May 31, in major markets across the country,
including New York, Chicago, Los Angeles, and Atlanta. Check your local listings
and visit www.blackenterprise.com/ourworld for additional time and station
information.


About Our World with Black Enterprise

Posted by Dankwa Brooks at 4:00 PM No comments: 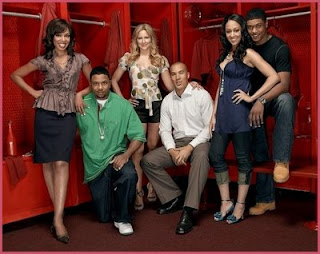 The Game: Officially Not Returning To The CW
By Karu F. Daniels-Entertainment Weekly

Something some hope wouldn't have happened eventually did: 'The Game' will not be returning to The CW's fall line-up.

A groundswell of support via a grassroots Internet campaign didn't help the three-year old show, which revolved around the lives of professional football players and the women who loved them.

Starring Tia Mowry, Pooch Hall, Wendy Racquel Robinson, Kobe Bell, Hosea Chanchez and Brittany Daniel, (cast photo above) 'The Game' originated as a spin-off of the Kelsey Grammer-produced 'Girlfriends' and served as a launching pad for the network, which is helmed by Dawn Ostroff.

"In just three years, The CW has become TV to talk about, with culturally current, quality programming," Ostroff said in a statement. "We have a full slate of great programming to keep our viewers watching, chatting, texting and tweeting all next season."
Maybe some viewers. 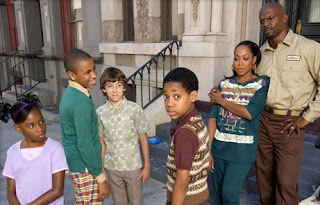 The other African American-targeted sitcom 'Everybody Hates Chris' (cast photo left) won't be returning in the fall either.

The fifth broadcast television network will not program on Sunday nights and has cast aside all comedy in favor of scripted dramas with female appeal and 'America's Next Top Model.'

Mowry, one of the more recognizable stars of the show, was saddened by the news today and thanked her fans via her Facebook page. "Life is so funny. But what is in the dark ALWAYS come to light," she added after making mention of "pathological liars."

Chanchez commented on his: "I thank those of you who helped us to shine for three years. I'm sad but determined to continue to fly high and prosper."

WASHINGTON — President Obama joked about celebrating the "10-day anniversary of my first 100 days in office" at the White House Correspondents' Association Dinner on Saturday (May 9).

Obama called his first 100 days a "whirlwind of activity. We enacted a major economic recovery package, we passed a budget, we forged a new path in Iraq. And no president in history has ever named three commerce secretaries this quickly."

The annual event, which draws a mix of journalists, celebrities and political figures, took over the Washington Hilton, where just months earlier Obama and wife Michelle danced to At Last at the Youth Inaugual Ball.

The celebrities included Ashton Kutcher and wife Demi Moore who attended as guests of CNN. It was a family affair for Kyra Sedgwick, who came with husband Kevin Bacon and daughter Sosie. "It's kind of a mob scene but I'm really enjoying my table. Unfortunately my husband is at the People magazine table but not unfortunately because he says he gets the award for the strangest name table: Ludacris, Sting, (Jon) Hamm and Bacon," said Sedgwick. "But I have a nice table. I'm enjoying talking to everybody. I'm thrilled to be here. It's a lot of fun."

"The craziness is positive," said Tyra Banks amidst the throngs of people. Banks spoke highly of the first lady: "She's my new role model."

From USA Today. Edited by Dankwa Brooks. You can read the full article here

You can watch the president's speech...er jokes below.

Posted by Dankwa Brooks at 2:08 PM No comments: 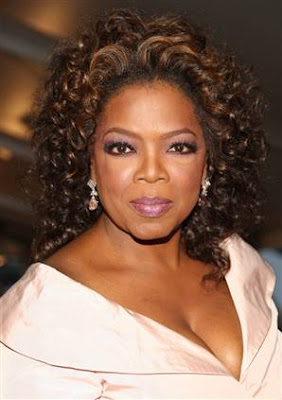 Oprah Winfrey tops the inaugural Forbes list of the Wealthiest Black Americans, as recession cuts into the fortunes of others.
Matthew Miller, Forbes Magazine

Oprah Winfrey (Pictured left) is one of the most lucrative brands in the world. Today The Oprah Winfrey Show airs in 144 countries, drawing 44 million U.S. viewers each week. Her Harpo Productions helped create the likes of Dr. Phil and Rachael Ray. She's produced Broadway shows and has her own satellite radio channel. For all of this, she consistently earns more than $200 million a year.

And unlike many others on our list, her business is weathering the recession well. Winfrey continues to entice viewers with money-saving tips, celebrity interviews and relationship advice. She's debuting a new show this fall, which will be hosted by frequent guest Dr. Oz, and is planning to launch The Oprah Winfrey Network early next year.

With a net worth of $2.7 billion, Winfrey tops the inaugural Forbes list of the Wealthiest Black Americans. She is the only billionaire on the list of 20 tycoons, all of whom are self-made. The group built their fortunes across a spectrum of industries spanning athletics and entertainment, media, investments, real estate, construction and restaurants.

Black Entertainment Television founder Robert Johnson became the first African American billionaire in 2000 after he sold the network to Viacom ( VIA - news - people ) for $3 billion in stock and assumed debt.

Between Winfrey and Robert Johnson, in second place is golf phenom Tiger Woods, worth an estimated $600 million. Woods left Stanford University after two years at age 20 to turn pro and has dominated the links ever since, winning 66 PGA tournaments--including 14 major championships.

Woods' career winnings exceed $80 million, but his real money is made off the course. His annual prize money represents less than 15% of his income, with splashy sponsorship contracts from Nike ( NKE - news - people ), Gatorade, Gillette, Accenture ( ACN - news - people ), AT&T ( T - news - people ) and others raking in at least $100 million each year.

Rounding out the top five are two basketball greats: Michael Jordan ($525 million) and Earvin "Magic" Johnson, Jr. ($500 million), both of whom parlayed their time on the court into lucrative endorsement and business deals in retirement.

You can read the full article at Forbes.com here
In Pictures: The 20 Wealthiest Black Americans

Posted by Dankwa Brooks at 12:00 PM No comments: