Chris Tucker is BACK! 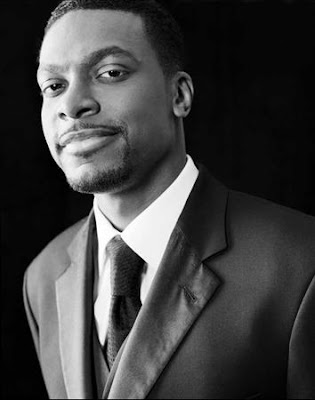 Back Again, Whether or Not He Was Away

FOR no more than a minute Chris Tucker (pictured above) posed audaciously on the stage of the Shoreline Amphitheater here on Saturday night, clad in leather jacket and dark sunglasses, as he absorbed the cheers and applause of the crowd. To the 20,000 or so enthusiastic audience members at the Wild 94.9 Comedy Jam, his entrance alone was a satisfying end to what felt like an eternity of anticipation.

Yet to Mr. Tucker, 38, the manic, motor-mouth comic and actor who ascended from the low-budget comedy “Friday” to the blockbuster “Rush Hour” franchise before an abrupt vanishing act, the four years that have elapsed since his last substantial screen appearance have gone by in no time at all.

As he relaxed in an upscale hotel room in nearby East Palo Alto, hours before a standup set in which he riffed on his celebrity lifestyle, his A-list friends and his vertiginous tax bill, Mr. Tucker said that all the questions he gets about his hiatus are probably a sign that he took one without realizing it.

“It doesn’t really feel like it,” Mr. Tucker said, his voice rising from subdued to cartoonishly squeaky, “until people say, ‘Hey, where you been?’ I’ll be like: ‘I’ve been here. I’ve been living.’ ”

Mr. Tucker was not likely to dispel these questions at a comedy concert that saw him billed alongside Dave Chappelle and Katt Williams, fellow stand-ups who have taken very public departures from their work: Mr. Chappelle amid his unease about the racial overtones of his hit Comedy Central series “Chappelle’s Show” and Mr. Williams under a cloud of arrests and personal problems.

He says nothing was specifically responsible for his detour, except disappointment with the roles offered him. And Mr. Tucker, who on Friday will begin his own cross-country comedy tour in preparation for what he says will be bigger things to come, is supremely confident that he can pick up exactly where he left off.

“It would only make me better to be more patient,” he said. “I was fearless with that. Because I believe in myself. And I believe that I can always come back in the business.”

Mr. Tucker, who was raised the youngest of six siblings in Decatur, Ga., and now splits his time between Atlanta and Los Angeles, was no less self-assured — though a bit more impulsive — when he burst onto the scene in the 1990s.

Brett Ratner, who directed Mr. Tucker in “Money Talks” and the “Rush Hour” movies, recalled that in 1994, when he recruited the comedian from his “Def Comedy Jam” audition tapes to appear in the video for “Nuttin’ but Love” by Heavy D & the Boyz, Mr. Tucker unhesitatingly asked for $1,000.

The following year Mr. Tucker landed a life-altering role as Smokey, the strangely frantic stoner pal of Ice Cube in the comedy “Friday.” F. Gary Gray, the film’s director, said he fought for Mr. Tucker over actors who were better known at the time, like Chris Rock and Tommy Davidson, believing he possessed an innate star quality.

“His audition was just O.K., it wasn’t great, but his ability to improvise was unmatched,” Mr. Gray said. “We shot the movie in 20 days, so if we had the luxury of a second or third take, then I would let him improvise, and he was brilliant.”

“Friday” became a cult hit, grossing more than $27 million on a $3.5 million budget, according to boxofficemojo.com. But Mr. Tucker declined to participate in any of its sequels. “People are loving it,” he said, “and why mess with it when people love it? Let that just live on.”

He was not similarly concerned about appearing repeatedly as the mismatched police partner of Jackie Chan in three “Rush Hour” movies, which took in more than $850 million worldwide between 1998 and 2007. These are the only films Mr. Tucker made during this period, and he has not made another one since.

“It was something easy for me to do,” Mr. Tucker said of the franchise, “and it traveled well, so it made sense.” It surely did not hurt that he reaped a $20 million salary for “Rush Hour 2” and $25 million for “Rush Hour 3.”

His goal, Mr. Tucker said, was to work on the “Rush Hour” series while he pursued other more ambitious roles. “When I got to ‘Rush Hour,’ ” he said, “I felt like: O.K., I’ve proven myself as the pinnacle. Now where’s all the bigger movies?”

Instead, he said, the parts he was offered were too similar to “Rush Hour” and “frankly, just weren’t good enough.” So Mr. Tucker said he simply sat it out, rather than accept projects to stay in the public eye.

In the intervening years he retraced his lineage for the PBS series “African American Lives,” made trips to the Cannes Film Festival and cultivated a friendship with Michael Jackson.

“I probably wouldn’t have wanted to be around him if he wasn’t nice,” said Mr. Tucker, who appeared in the video for Jackson’s “You Rock My World.” “But he was so kind to me. He knew I was a big fan. When I thought he was around, if I heard he was around, I would reach out.”

Colleagues suggested that Mr. Tucker is not a man who makes commitments easily. Mr. Ratner said he begged him to do “Rush Hour 3,” and resorted to crocodile tears to convince him to take a small role in Quentin Tarantino’s 1997 crime drama “Jackie Brown.”

“He goes, ‘Stop crying, Jew boy,’ ” Mr. Ratner said, imitating the high-pitched voice Mr. Tucker uses when he is being facetious. “He called me Jew boy, but he can call me whatever he wants, because we’re friends.”

(Mr. Tucker said he did not remember discussing “Jackie Brown” with Mr. Ratner and took the role over the objections of a manager who felt it was too small for him.)

Mr. Ratner predicted that Mr. Tucker would face no shortage of film opportunities when he completes his comedy tour, which is booked through November in 20 cities from Seattle to Miami Beach. “Look, people get angry,” he said. “They’re like, ‘He’s wasting his time, he’s wasting his life, he could have made $100 million.’ But it’s his own journey. How are you going to be upset about what he’s choosing to do with his life?”

Mr. Tucker did not provide details about the film projects he was developing for himself and hoped to get into production later this year. Asked to name an actor whose career he wished to emulate, he immediately said Sidney Poitier, citing “The Defiant Ones” as a movie that “meant something.”

“It was what was going on in real life,” Mr. Tucker said. “It’s social, real stuff, and I like movies like that.”

He said he did not think about topics like why he and peers like Mr. Chappelle and Mr. Williams seemed to fall off the map at the height of their success.

Nor did Mr. Tucker discuss reports that he owes more than $11 million in federal taxes, beyond the jokes he makes in his own act. (“That’s the last time I let Wesley Snipes help me out with my taxes,” he said on Saturday night.)

He recognized that his current stand-up routine, in which he jokes about attending a Prince concert with Jackson, meeting President Obama and the various pitfalls of fame, was substantially different from the one he performed when he was younger and, perhaps, hungrier.

He added that the key to connecting with audiences was “to tell them the truth, so they can relate to you.”

If he did not seem to display his usually boundless energy in his hotel room, Mr. Tucker said he was certain — as he is about most things — that he could turn it on the moment he faced that night’s crowd, a prediction that was audibly confirmed by his reception a few hours later. “They’re going to yell at me, I’m going to yell back,” he said. “If we’re in the hotel just chilling, I’m chilling. If I’m yelling, you’re going to think I’m crazy. You’ve got to adapt to your situation.”