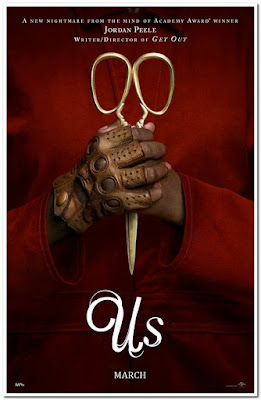 
Universal's release of Jordan Peele's Us dominated the domestic box office, not only out-performing the opening weekends for several recent horror hits, but delivering the second largest opening ever for a live-action, original picture, topping the weekend box office with over $70 million. As a result, the 2019 box office continues to improve over the month of March after struggling to begin the year. Overall, this weekend was the third straight to outperform the same weekend last year.
At #1, with an estimated $70.25 million (~49.6% of all tickets sold among the top 12 films), Us topped the weekend box office with the third largest opening of all-time for an R-rated horror film, blowing away 2018's The Nun ($53.8m opening) and placing behind Universal's own Halloween, which opened with $76.2 million last October. The film also decimated the opening for Peele's previous film Get Out, which was a massive hit back in 2017 following a $33.3 million debut. Get Out would go on to gross over $176 million domestically, ranking as the third largest horror film of all-time domestically.
One mind-blowing stat is to note that while animated features such as Inside Out ($90.4m), Zootopia ($75m), The Incredibles ($70.46m) and Finding Nemo ($70.25m) opened higher, the $70.25 million debut for Us is the largest opening for a live-action, original film since Avatar's $77 million debut back in 2009. On a list dominated by sequels it's not often original content is seen to climb quite so high.
Additionally, Us delivered the largest opening for an original, R-rated film, topping Universal's Ted ($54.4m) not to mention the largest opening for an original horror film, topping A Quiet Place ($50.2m). The performance comes with a "B" CinemaScore, which is a notch below the "A-" for Get Out, but is still a solid audience grade for a horror film. The overall opening weekend audience was split 50/50 among males and females and 53% of the overall audience was aged 25 or older.
Looking ahead at its domestic prospects, it's not easy to determine just how high Us will climb. While Get Outpushed over $176 million, Halloween finished its run with $159.3 million, though the latter was certainly a product of nostalgia and seasonal relevance. That said, one would expect Us to play closer to Get Out and push over $200 million, but how far over? On average, films that open anywhere from $65-75 million deliver a 3.36x multiplier, which would suggest a domestic performance around $236+ million, which seems like as good a bet as any right now.
Internationally, Us debuted in 47 markets and brought in an estimated $16.7 million led by a $3.67 million opening in the UK to go along with a $1.98 million France debut, $1.36 million in Germany and $1.17 million launch in Spain. Next weekend's key markets include openings in Korea, Russia and Australia followed by openings in Italy (Apr 4), Mexico (May 3) and finally Japan on August 23. 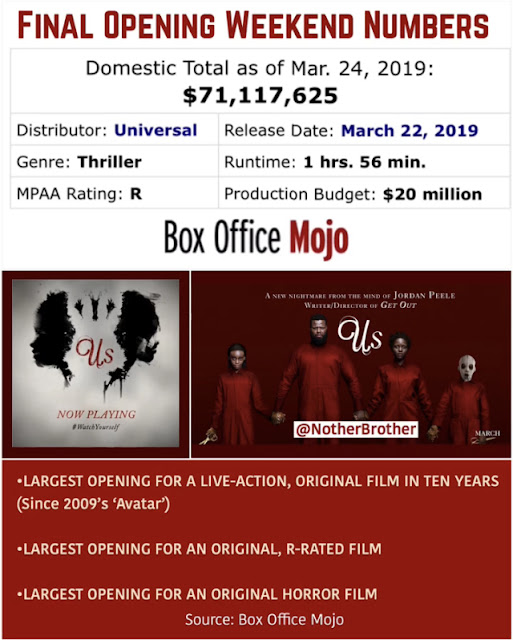 Posted by Dankwa Brooks at 10:49 AM No comments: