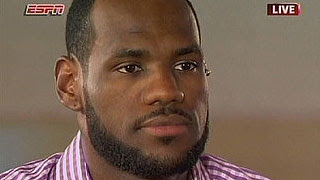 The hour that ESPN devoted to LeBron James (pictured left) and his choice of where to play basketball next season was widely reviled (outside Miami, anyway) -- but it was also widely watched.

ESPN says "The Decision" -- in which NBA star James announced he was leaving the Cleveland Cavaliers for the Miami Heat -- drew a 7.3 rating in the overnight metered markets, higher than any other show on TV Thursday night (July 8). By comparison, CBS' rerun of "The Mentalist" got the best overnight number on broadcast TV with a 6.0; that translated to a 5.6 rating/10 share and 8.6 million viewers in the fast nationals, so the James special probably drew somewhere between 9 million and 10 million viewers.

That, by the way, is more people than typically watch actual NBA games (even in the playoffs) on ESPN or the league's other cable partner, TNT.

Not that viewers got much for their time.

James and his handlers essentially bought the hour from ESPN and sold the ad time, then donated money to the Boys and Girls Clubs of America. The actual decision wasn't made public until about halfway through "The Decision"; most of what became before and after was filler, and critics have used words like "horrid," "crass" and "cruel" and deemed the way James handled the announcement a disaster in terms of his image. 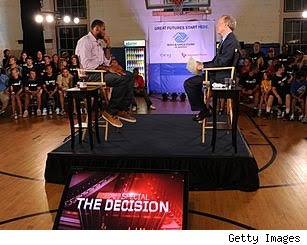 The Decision Is In: ESPN Guilty of Hype

Once upon a time, the letters in ESPN stood for Entertainment Sports Programming Network. The channel officially went with just the letters years ago, but every so often, it's instructive for viewers to remember that fact, because apparently some people inside the Bristol, Conn., headquarters have never forgotten the entertainment or programming part of the acronym.

Thursday's airing of LeBron James' announcement of the Miami Heat as his team of choice was just the latest example of how the E and P increasingly trump the S at ESPN.

The needle on the meter of the hype machine started in the red at 9 p.m. EDT, the minute "The Decision" began, when some disembodied voice declared James to be the most significant free agent in NBA history.


That needle stayed pinned to the red and extended even into the commercials when the second ad of the hour was for a flavored water homage to James, with references to the momentous choice that was coming.

No promotional/hype stone was left unturned, even down to a "Breaking News" ticker that declared in the commercial break right before the announcement was made that James was on stage to make the announcement.

And while Norby Williamson, ESPN's executive vice president of production, pledged that James would make his announcement in the first 10-15 minutes, the choice wasn't revealed until 9:27, all the better for the channel to run promos for its World Cup and Home Run Derby coverage.

When the moment finally arrived, Jim Gray, James' handpicked interviewer, appeared hell bent on extending his own 15 minutes in the limelight.

Gray admitted on Dan Patrick's Fox Sports Radio show that he set the wheels of Thursday's monstrosity in motion by approaching James' friend and marketing advisor Maverick Carter during Game 2 of the NBA Finals and proposing a one-hour show for James' announcement -- with him as interviewer.

And Gray, who hasn't been this relevant since he made Pete Rose sympathetic by trying to get him to confess to betting on baseball before Game 2 of the 1999 World Series, dragged out his moment in the sun, asking 16 questions of James before finally getting around to the only two anyone was interested in -- namely, Who and Why?

The sycophantic Stuart Scott, a most unfortunate choice to host the evening, demonstrated his worth to the proceedings with his first question to James: "What text message that you've received since you made your announcement has impacted you the most?"

The hour didn't completely tarnish all the ESPN talent. Analyst Jon Barry's reference to NBA reporter Chris Broussard as "Clarence Beeks," from the Dan Aykroyd-Eddie Murphy movie Trading Places, was a laugh-out-loud moment. And Michael Wilbon was spot-on in his vigorous questioning of James after the decision was announced.

All in all, the Worldwide Leader took what should have been a 10- or 15-minute exercise at most and turned it into a six-hour marathon, counting the SportsCenters on either side.

In the process, ESPN trampled over the twin ideas of context and solid journalism, all in the name of hopefully drawing a big audience.

It didn't seem to matter to ESPN President George Bodenheimer that handing over an hour of programming and advertising revenue to James, a person that the news division at ESPN has to cover when this was all over, sets a horrible precedent. All that was important was getting eyeballs in front of the television or computer screen, or ears in front of the radio.

Bodenheimer and the rest of the executive coterie at ESPN can attempt to assuage themselves about the harm they've done to the reputation of the newsgathering operation in Bristol by saying that James was turning over the night's proceeds to charity and that its producers were in control of the evening.

And you thought the Brothers Grimm could spin fairy tales.

No, ESPN lost control of things last Friday when Carter, James' right hand man and the CEO of his marketing company, approached network executives about a one-hour show to announce where James would play.

Instead of laughing Carter and James off the phone, ESPN officials gave them the green light. But it didn't stop there. They let James dictate how the evening would play out, even down to where the interview would take place and who would do it.

No self-respecting newsgathering organization ever lets the subject take control of an interview, even if a charity as noble as the Boys and Girls Clubs of America is a beneficiary.

Hardly anyone associated with Thursday's journey into wretched excess should walk out of it feeling clean. And worse yet, ESPN has almost certainly set a precedent that if the subject is big enough and the topic is important enough, entertainment and programming will always come first over sports and journalism.

There's just one more question left from Thursday: What time does the Brett Favre show start?

Cool Black's Extended Mad Commentary: I thought the whole concept of this special was inventive yet ludicrous when it occurred to me…it wasn’t that inventive. Almost 30 years ago something similar happened.

On November 9, 1982, after consulting with doctors, friends and family, [Sugar Ray] Leonard invited Marvin Hagler, Muhammad Ali and other boxing dignitaries to a charity event in Baltimore, Maryland. Standing in a boxing ring with Howard Cosell nearby, Leonard announced his retirement, saying "a bout with Hagler would be one of the greatest in the hsitory of boxing...unfortunately it will never happen". Leonard maintained his eye was fully healed, but that he just didn't want to box anymore. (The fight finally did occur five years later promoted as "The Super Fight," April 6, 1987).-The Fort Scott Tribune

I was present at that event. I remember my uncles taking me and my brother see some “Sugar Ray Leonard thing” at the Baltimore Civic Center (now the Baltimore Arena). We knew it wasn’t going to be a fight, but some announcement thing. What resulted was the same sort of spectacle that occurred Thursday night. Lest us not forget, all sports are spectacles and they love putting on a show.

Back to the LeBron spectacle…I mean special. I ain't gonna lie, I watched this special. Even though I haven't followed basketball since the Michael Jordan Chicago Bulls, I was available and I was interested to watch it live. Never watched LeBron play, but as you may can tell from this blog, I'm a fan of black pop culture and this was black pop culture in full display.

First of all the special really was ridiculous. Like stated in the article above "the minute "The Decision" began, ...some disembodied voice declared James to be the most significant free agent in NBA history." That was the most ridiculous crap I ever heard in my life. Not the subject, but the delivery. It really was laughable.

LeBron could have accomplished the same feat on a 15 minute segment on another news program NOT a whole hour. Yes they shrouded it as raising money for the Boys & Girls Club, but everyone recognized it for what it was marketing and hype.

It was inevitable that some manager or agent would try something like this…again so now that we got this over with, let's hope it never happens again.

Read the source article with links, video and comments
The Decision Is In: ESPN Guilty of Hype

You can read an article about the Sugar Ray Leonard event at Google News at the link below:
http://news.google.com/newspapers?id=uNYfAAAAIBAJ&sjid=HNkEAAAAIBAJ&pg=4277,5056212&dq=ray+leonard+cosell+retirement+hagler+baltimore&hl=en

Posted by Dankwa Brooks at 6:00 AM No comments: