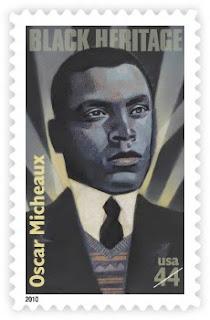 The 33rd stamp in the Black Heritage series, to be issued June 22, honors pioneering filmmaker Oscar Micheaux, who wrote, directed, produced and distributed more than 40 movies during the first half of the 20th century. An ambitious, larger-than-life figure, Micheaux thrived at a time when African-American filmmakers were rare, venues for their work were scarce, and support from the industry did not exist. Micheaux’s entrepreneurial spirit and independent vision continue to inspire new generations of filmmakers and artists.

This stamp features a stylized portrait of Oscar Micheaux by Gary Kelley. The artwork is based on one of the few surviving photographs of Micheaux, a portrait that appeared in his 1913 novel The Conquest.

Although only 15 of his movies are known to have survived in whole or in part, Micheaux has become a cinematic icon. In 1986, he was posthumously awarded a special Directors Guild of America award. In 1995, the Producers Guild of America established the Oscar Micheaux Award to honor “an individual or individuals whose achievements in film and television have been accomplished despite difficult odds.”

July 7, 2010 UPDATE: USA Philatelic (stamp collectors) has a great page with LINKS to collectors editions of the stamp right here
Posted by Dankwa Brooks at 12:39 PM No comments:

What are the "Upfronts"?

I LOVE the Upfronts. Upfront week for television is when you learn what's been officially cancelled and get scoop on the upcoming new television shows.

Some shows get "early renewals", but for most shows they have to wait until their network's Upfront presentation to find out. The people on the show (cast and crew) of course finds out before, but not that long before. Usually news will leak to the media about what is cancelled, but the network Upfront presentation is the official word.

What exactly are the Upfronts though?

In the North American television industry, an upfront is a meeting hosted at the start of important advertising sales periods by television network executives, attended by the press and major advertisers. It is so named because of its main purpose, to allow marketers to buy commercial airtime "up front", or several months before the television season begins.

In the United States, the major broadcast networks' upfronts occur in New York City during the third week of May, the last full week of that month's sweeps period. The networks announce their fall primetime schedules, including tentative launch dates (i.e., fall or midseason) for new programming, which may be "picked up" the week before. The programming announcements themselves are usually augmented with clips from the new series, extravagant musical numbers, comedic scenes, and appearances by network stars, and take place at grand venues such as Radio City Music Hall or Carnegie Hall. Most cable networks present earlier in the spring since they usually program for the summer months; press attention to these announcements is usually much lighter.-Wikipedia

Most times though you here about cancelled shows early like the cancellation this year of the venerable Law & Order. During the summer the networks hype their new shows with television and print ads and most notably during the Television Critics Association summer press tour.


To be all on the scoop like I am you can check out Broadcasting & Cable magazine's page devoted to the Upfronts at the link below by clicking the graphic. WARNING: This is from an industry trade magazine and may get "industry technical". If you have questions post them in the comments below and I will do my best to answer them.-Dankwa Brooks


May 23, 2011
The Best and Worst of Upfront Week 2011 : "It didn't stop raining all week, a cable network exec by far was the biggest star on any stage and a flash mob even broke out at a network run by a guy named Pedowitz. Yes, Upfront Week 2011 left us all with plenty of memories."

May 24, 2010
The Best and Worst of Upfront Week 2010 : "We won’t really know anything about the new slate of shows until the fall, but this year’s upfront presentations had plenty of highs and lows. If you couldn’t score a hot upfront ticket, here’s what you missed."